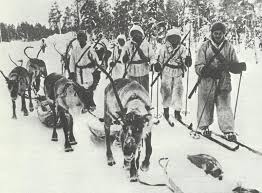 The Soviet attackers were so confident of conquering Finland that they established a Communist puppet “Finnish Democratic Government” in the small corner of Finish territory at Terijoki they occupied under their stooge Otto Kuusinen, who had fled to the Soviet Union after the failure to establish a Communist regime after the First World War. Kuusinen would supposedly sweep away the corrupt and exploitative regime and replace it with a worker paradise such as that enjoyed by everyone under Stalin.

The Germans were giving signs of discomfort at the Soviet  expansionist genie that they had released from the bottle with the Ribbentrop-Molotov pact. Formally they claimed that it was no business of theirs to interfere in an area where proven Soviet interests had come under threat. Privately the invasion was labelled a Schweinerei and blamed on the British for having made the Ribbentrop-Molotov pact necessary offering a guarantee to Poland.

In what was to be almost its last hurrah, the League of Nations in Geneva debated a Finnish request for help. As a number of Latin American states pointed out, the League’s qualification for the task was undermined by the fact that the aggressor was still a member of the organization in “good standing.”

The weather came to the assistance of the defending Finns and a harsh winter with heavy snowfall descended on the front. Finland’s experienced ski-troops were far better able to cope than the Soviet infantry. The Finnish army retreated in good order to its main defensive position, the Mannerheim Line, north of Lake Ladoga on the Karelian Isthmus. They inflicted severe casualties on poorly led and organized units of the Red Army.

The British Foreign Secretary made a high profile statement of allied war aims in the House of Lords. In keeping with his usual wordy and Pious style, Lord Halifax filled his speech with benign platitudes. The nearest he got to anything remotely aggressive was to  insist that a settlement would only be signed with a government whose signature could be trusted, but he fell short of saying whether a Nazi regime could ever fit the bill. It was in marked contrast to a broadcast that Churchill had made to the US a fortnight before in which had castigated  most of the senior Nazi leaders by name. The arch-appeasing junior foreign minister, Rab Butler, had privately dismissed the speech as “vulgar beyond words.”

The pocket battleship Graf Spee continued her rampage around the southern oceans. Her latest victim was the liner Doric Star, who was sunk off Africa. Before she went down she was able to signal the Admiralty her location and the type of her attacker. This was enough for Commodore Harwood, leading three smallish RN cruisers in the Southern Atlantic to guess accurately that the Graf Spee ‘s next target would be British shipping off South America at a similar latitude. His force set off towards the River Plate estuary  in anticipation.