Eighty years ago, a messy ministerial reshuffle in Britain hints at the hidden powers of the Prime Minister's chief Civil Service advisor 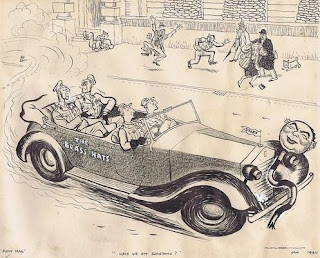 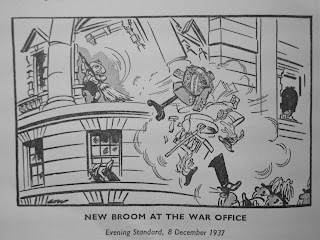 Neville Chamberlain’s government underwent an unheralded ministerial reshuffle. The main moves were distantly linked, but in reality they were expedients forced on Downing Street by poor choices of ministers in the first place.

The War Minister Leslie Hore-Belisha left office unexpectedly. His sacking came as a surprise to even informed observers; only a handful of insiders had been able to observe the near complete breakdown of trust between Hore-Belisha and Lord Gort, the commander of the BEF, and his colleagues. Hore-Belisha had been placed in the War Office by Chamberlain in order to shake up the complacency of the generals in 1937. Chamberlain was taken in by Hore-Belisha’s air of confident reform-mindedness as minister of Transport. In fact he was a noisy self-publicist, whose only permanent legacy is the Belisha beacon at zebra crossings. He was also one of the National Liberals ministers over-promoted to sustain the increasingly notional coalition and, so conspiracy theorists whispered, to keep discipline amongst Conservative ministers and hopefuls. In wartime it was inevitable that his clash with the generals would be fatal for him.

The travails of the Ministry of Information seemed at first to offer an elegant solution. Lord Macmillan, the former Scottish judge, was unsuited to be minister in every way, except that as an unchallenging nonentity he had met the desiderata of Sir Horace Wilson, the Head of the Civil Service and pre-war architect of the ongoing debacle that was the MoI. Macmillan was desperate to escape the calvary of the MoI and replacing him with Hore-Belisha would have solved both problems elegantly. Chamberlain was keen to save Hore-Belisha’s face. However Hore-Belisha was a Jew and the Foreign Office vetoed the appointment as they believed it would have offered German an easy propaganda win as well being objectionable in the still-neutral countries of the Balkans with their long traditions of venomous anti-semitism. (Hore-Belisha’s Jewishness had not helped relations with the generals either) Hore-Belisha was thus despatched into the wilderness from which he never returned and the MoI was given to Sir John Reith, former Director-General of the BBC and entirely in the pocket of Wilson, who was able to keep his hands on the MoI’s levers of power.

Wilson’s control of ministerial appointments was also evident in the choice of Andrew Duncan to replace Oliver Stanley, who left the Board of Trade to replace Hore-Belisha at the War Office. Duncan came from the stable of businessmen around Montagu Norman, Governor of the Bank of England and a close ally of Wilson. Duncan had no political background and thus fitted Wilson’s preference for pure technocrats as ministers. This aspect of the question was reinforced by the decision to parachute Duncan and Reith into safe Parliamentary constituencies. This figleaf of political standing emphasised rather than masking the fact that they were not politicians of any kind. Privately Reith found this part of the process loathsome.