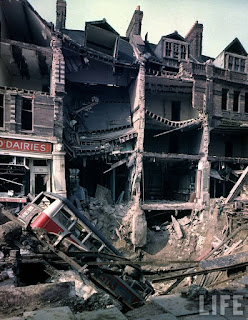 Neville Chamberlain delivered a phrase that fully deserves to rank with his "peace for our time" declaration as one of history's great inaccurate statements. In a speech to the Conservative Party Central Council he claimed that there was no doubt that Hitler had "missed the bus".  Chamberlain meant that Germany had lost its chance to defeat Britain by not attacking on the outbreak of war when Chamberlain believed it had immense military superiority, in particular the ability to bomb London flat almost unchallenged. In reality the Luftwaffe was never capable of this or even planned to.  Chamberlain gave further evidence of complacency and mis-placed optimism by going on to boast that Hitler had  "very little margin of strength still to call upon." The war was as good as won. In the event Chamberlain was proved wrong even more quickly than he had been over his belief in the permanency of the Munich settlement. His comeuppance took less than a week to arrive.

The prime minister's mis-placed confidence in the military balance of power probably contributed to his support for the laying of mines in Norwegian waters which was getting under way. Despite strong evidence of a build-up in German forces in the region, Allied leaders were unaware that Hitler had prepared an imminent response to their challenge to Norwegian neutrality.

The day after mining began, German launched a full-scale and well-planned invasion of both Denmark and Norway which put an end to the cosy fantasies of the phony war. The Kriegsmarine suffered some casualties but neither of the neutral states was able to defend itself effectively against the sea and air landings. Denmark was completely overrun almost immediately and German forces swiftly seized the Norwegian capital Oslo. Resistance continued in the north of the country but Germany had near complete air superiority.

Baulked of a complete victory over Finland, Stalin turned to the destruction of the Polish nation as far as it lay in his power. De facto the eastern half of the country invaded following the Ribbentrop-Molotov pact had been incorporated into the USSR, in practice denying that Poles had any distinct national or regional identity.  Soviet security forces began the slaughter of some 22,000 Poles who had been captured after the invasion. This came to be known as the Katyn massacre after the spot where the largest number of victims were buried. Military and police officers accounted for about two-thirds of those killed; the rest were landowners, intelligentsia and anyone else with any kind of social prominence.