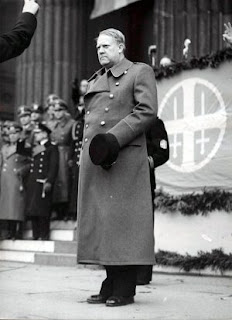 The announcement that a new government with a complete cabinet had been formed in Norway under the leadership of the head of the country’s Nazi party, Vidkun Quisling, proved to be over hasty. King Haakon refused to approve Quisling’s seizure of power, which largely deprived him of his potential value as puppet ruler. The Germans dispensed with any pretence that they were anything but conquerors and appointed Josef Terboven as Reichskommissar. The only immediate outcome of Quisling’s attempted coup was to add a new word to the English language with quisling becoming a generic term for any collaborator or traitor. Sir Horace Wilson, Chamberlain’s arch-appeaser right-hand man, was swiftly rechristened Sir Horace Quisling.

The Royal Navy went into action against the units of the Kriegsmarine that had brought German invasion forces to the north of Norway through the port of Narvik. British destroyers twice entered the fjord in what came to be known as the first and second battles of Narvik. The British suffered some losses but the German fleet lost about half its destroyers. The Royal Navy could afford the losses, the Germans could not. They had already lost one heavy cruiser Blücher in the attack on Oslo and in other actions the British sunk a light cruiser and damaged the heavy cruiser Lützow severely. Well before a seaborne invasion of Britain even became a remote possibility, the German naval forces that it would have required had practically ceased to exist.

Ill health forced the Labour MP for Battersea North to resign, sparking a by-election. In keeping with a wartime agreement between the main parties not to contest by-elections, the Conservatives did not put up a candidate so as to leave the Labour candidate with a clear field. At the last moment an official of the local Labour Party called Joyce presented himself as an “anti war” candidate with the backing of the Communist Party, which was under the control of the Soviet Union then still neutral and uneasily aligned with Nazi Germany. The situation was all the more surreal as Joyce had actually signed the nomination papers of the official Labour candidate. Joyce polled only 7% and lost his deposit.