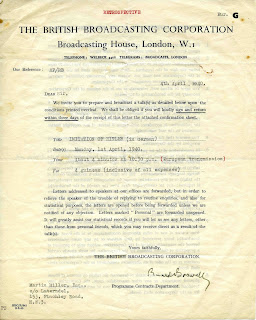 Radio listeners on a BBC frequency were treated to what purported to be the retransmission of a broadcast (in German naturally) by Adolf Hitler in which he claimed that America had been discovered by the use of German technology. Americans of Czech and Polish origin were apparently clamouring to be given the benefits enjoyed by their ehtnic brothers of living under a German protectorate. The US was thus to become incorporated into the greater Reich. Hitler would take his pre-ordained seat in what was to be renamed "The Brown House." According to one story, the US network CBS contacted the BBC in some panic to find out more. It was an April Fool hoax, with an Austrian emigre actor, Martin Miller, imitating the Fuehrer and reprising a skit he had performed in cabaret. The BBC was punished by a complaint from the official covert propaganda outfit, Electra House, that it was trespassing. Electra House was the brainchild of Sir Campbell Stuart, who used the pretext of secrecy to run it as a personal fiefdom. As Stuart had played a key part in government manoeuvres to damp down propaganda before the war as part of Chamberlain's appeasement programme, he had enjoyed powerful political backing. http://www.bbc.com/culture/story/20190829-how-britain-fought-hitler-with-humour

The death from a heart attack of Sir John Gilmour, the Shipping Minister, removed  one of the more embarassing personnel selections that Chamberlain had made. Gilmour had benefited from the prime minister's penchant for time-expired aristocratic politicians when the ministry was created on the outbreak of war; Gilmour was widely regarded as  joke. His death created the opportunity for a ministerial reshuffle in which other errors could be buried. The job of minister of defence coordination was quietly abolished; its incumbent Admiral Lord Chatfield had failed to live up to early expectations. In practice his job was replaced by putting Winston Churchill in as chairman of the Military Coordinating Committee.  Kingsley Wood could also be quietly removed from the Air Ministry, where his enormous skill at reaping political kudos from the work of his juniors had been relatively innocuous in peacetime (apart from his calamitous decision to hand the government's crucial Spitfire factory to the car-maker Lord Nuffield) but unsuited to the needs of war.

Winston Churchill delivered a speech which seemed to be trying to coax Europe's neutrals into the allied camp. He set out their uncomfortable position in a continent under threat from Germany; his clear implication was that sooner or later they would be forced to choose between subjugation by the Nazis and active resistance. The Netherlands was given special attention as a country forced to dwell in a "tiger's cage." The Dutch were even forgiven for shooting down a stray British aircraft and lauded as "our valiant allies of former days." Very former days indeed, as Holland and Britain had last fought together two hundred years before in the War of Spanish Succession. Churchill's ancestor, the Duke of Marlborough, had been the dominant figure in that alliance so it might have been more real to him than to most of his listeners. The hidden sub-text to the broadcast lay in Churchill's plan to mine Norwegian waters and cut off iron ore supply to Germany. The plan had just been approved by the Cabinet and the French government, and was about to be put into operation. One neutral government at least would soon be facing a severe test to its neutrality.