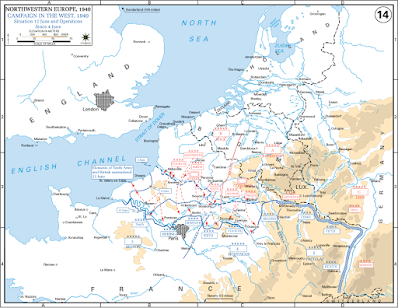 Hardly had Operation Dynamo, the evacuation of British and French troops from Dunkirk come to an end when the Germans unleashed the next phase of their attack on France. Their right wing reached the Seine with relatively little opposition. In the north the Wehrmacht’s thrust toward Paris faced greater resistance but the French army was forced to withdraw across the Marne.

The French political response to the military crisis was a cabinet reshuffle. Edouard Daladier, the architect of France’s appeasement, was removed entirely. Prime Minister Reynaud brought in the then almost unknown Brigadier Charles de Gaulle as junior war minister almost direct from the battlefield. De Gaulle had been a notable advocate of armoured warfare in the late 1930s. He had also been a protégé of Marshal Petain, who, ominously, kept his place in the cabinet. Reynaud broadcast to the nation in a distinctly downbeat tone. His claim to “confidence in our arms” rang distinctly hollow. He spoke of the “battle of France”, a phrase that became almost instantly current and provided the template for Churchill’s phrase the “battle of Britain.” With his usual penchant for misquotation Churchill attributed “battle of France” to General Weygand.

Faced with the growing debacle in France the allied forces withdrew from Norway where they had been holding on in the north of the country. They took King Haakon and his family into exile with them. He joined Queen Wilhelmina of the Netherlands in a growing band of London based governments-in-exile; they were soon to be joined by the émigré Czech and Polish governments who had to flee France.

In the course of the military evacuation from Norway the British aircraft carrier Glorious was sunk by Scharnhorst and Gneisenau in circumstances that have still not been fully explained. The proceedings of the Board of Enquiry into her loss remain closed until 2041. She was one of only two aircraft carriers sunk by surface ships during the war.

Sensing that France was almost beaten, Mussolini declared war on the allies with the intention of seizing territory at minimal military cost. Acutely aware of Italy’s economic and military weakness, he had reneged on his commitment to fight with Germany in September 1939, but now the temptation of easy gains was too great.

Churchill flew to France for the last but one meeting of the Supreme War Council. It took place at General Weygand’s military headquarters which had withdrawn south to Briare on the river Loire, although it was given out that the meeting took place in Paris. It was no more productive than its predecessors and General Spears, who was on the British delegation, was left with the impression that Weygand had abandoned hope.