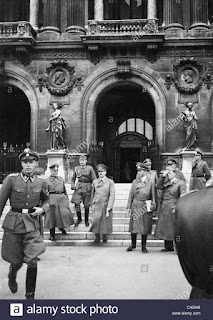 Hitler celebrated Germany’s triumph over France by staging a mirror image of the 1918 armistice talks that had brought the First World War to an end in German defeat. The railway carriage in which the armistice had been signed was returned to the same spot in the same clearing in the forest at Compiègne. The procedure was almost the same: the terms were set out to the delegates of the vanquished who then signed them; there was no serious discussion. Hitler sat in the same chair as Marshal Foch had done, gloating over his defeated enemies before departing abruptly, leaving juniors to accomplish the formalities.

According to the preamble to the armistice Germany was not seeking to use armistice or peace talks to humiliate France, as the allies had done to Germany at Versailles. In reality the terms of the armistice were far more severe than the 1918 edition. Germany was to occupy all of northern France including Paris and its whole western seaboard, more territory than the Wehrmacht had conquered. The only material concession to France was that the French navy was only to be disarmed (albeit under Axis control at ports of German or Italian choice) and not surrendered to Germany. Britain could do nothing about the main terms of the armistice, but it was acutely concerned at the danger that the French fleet might fall into Axis hands.

The next part of Hitler’s triumph over France was oddly muted: a visit to Paris that lasted a mere two hours. Like a wealthy tourist he was driven to all the main sites for a brief inspection with a photo opportunity at the Eiffel tower. There was nothing in the manner of a victory parade. The only spot where he did anything approaching a touristy linger was Naploeon’s tomb at Les Invalides. Ever after these moments have been the joy of photo-book authors and psycho-historians respectively. Hitler also played close attention to Charles Garnier's wildly ornate opera house, whose plans he had studied closely in keeping with his pretensions to being a connoisseur or architecture. He declined the services of an expert guide and pointed out the absence of some of the detail that Garnier had planned.

RAF Bomber Command aircraft were sent to attack German cities in some force. Casualties were light and damage was light to negligible. British propaganda authorities tried frantically to build an image of a relentless campaign of city bombing being waged from both sides, with over-blown accounts of scattered Luftwaffe nuisance raids.