Eighty years ago, Chamberlain finally repents and provides Churchill with cover for his "never surrender" speech 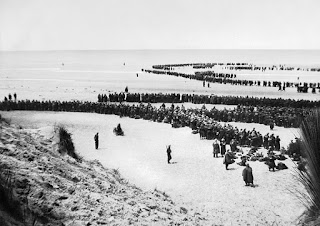 Operation Dynamo the evacuation of British and French troops trapped in the pocket on the coast of northen France around Dunkirk came to an end, having succeeded beyond the wildest expectations. Originally it had been hoped to rescue 50,000; in the event 338,000 men were brought over to the UK, one third of them French. The bulk of the BEF had been saved but all its heavy equipment had been lost. The Royal Navy lost six destroyers in the operation and the French navy three. The rearguard that had protected the beaches of some 40,000 French troops surrendered.

The RAF was heavily engaged trying to protect the evacuation and lost 145 aircraft incuding over 40 of the precious Spitfires. Inevitably much of the air fighting took place away from the men on the beaches, leading to complaints that the RAF was not helping. To address this, bombers that had been attacking German positions inland were instructed to fly back low over the beaches to show the flag. Some were shot down by trigger-happy British troops. Dynamo produced the usual crop of mendacious propaganda. The competition is stiff for the most outrageous, but the claim that one squadron of RAF Boulton-Paul Defiant fighters shot down 37 Luftwaffe planes in one day is a strong contender. The real figure was at the very most 10. The Defiant was a flawed concept armed only with a heavy, powered gun turret, designed to engage unescorted bombers but quite incapable of dog-fighting.

In the midst of Dynamo Winston Churchill faced the the most severe political challenge. The Foreign Secretary Lord Halifax, who had been one of the main figures in Neville Chamberlain's appeasement government, proposed that peace should be discussed with Germany with Mussolini as the intermediary.  He argued that more favourable terms would be available whilst France was still fighting; the Germans were still north of Paris at this point. In effect his case was that the Germans would reward the British for implicitly threatening to desert France.

The issue was debated in a fraught series of meetings of both the war and the full Cabinet over two days. Churchill unsurprisingly spoke strongly against the proposal, but it is posible that the crucial factor in the decision to reject the plan was that Chamberlain came out against it. He had finally understood that Hitler could never be trusted.

Armed with the public success of  Dynamo and the very private defeat of Halifax, Churchill was able to deliver arguably the most famous of all his speeches to the House of Commons. He carefully insisted that the "deliverance" of Dunkirk was not a victory but went on to promise:

He also threw in a kind word for the Defiant which he claimed was superior to its German opponents. He had championed  the turret-armed fighter when lambasting the government's rearmament in the air two years before. Churchill was very often right on the big picture, but lamentably wrong on the detail.

The movie Darkest Hour features a version of these events which is almost entirely imaginary.