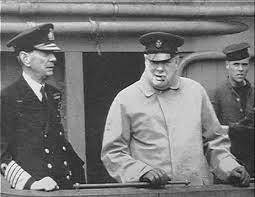 Operation Crusader, the British attack in the western desert  was unsettled by a deep thrust into the British rear by Rommel. The Eighth Army commander Alan Cunningham over-estimated the threat and sought to call off his offensive. General Auchinleck, in command of the theatre, disagreed and sacked Cunningham, replacing him with his own chief of staff, Neil Ritchie, who had longer experience of the fluid conditions of desert warfare although relatively junior.

The Germans made one of their rare direct interventions in the personnel of the Vichy regime when it lobbied for the dismissal of General Maxime Weygand, who was in charge  of the colonies in North Africa. He had collaborated with the Germans but had opposed the "Paris Protocols" under which they were to be given bases in the French colonies. He and Vichy's prime minister Admiral Darlan detested each other. Weygand was duly sacked.

Admiral-of-the-Fleet Sir Roger Keyes, who had been sacked as chief of combined operations a few weeks before, used his position as an MP to complain publicly about his removal. In  May 1940 his attack on the prime minister in the House of Commons wearing full dress uniform had been a striking feature of the Norway debate  which led to Chamberlain's fall, but here he had less effect. Churchill had appointed him as a heroic figure from the First World War despite his age, but had tired of the grandiose and unrealistic plans he advocated. Keyes claimed that the dispute had been over control of the newly created commando force, but most observers understood that the they were witnessing an example of Churchill's flawed choice of military leaders.

The diplomatic dance in the Far East continued, essentially as a cloak for Japan's decision to go to war. The US was more ambivalent but it is hard to believe that President Roosevelt saw any real prospect of remaining at peace. The US Secretary of State countered Japanese proposals with the demand that Japan recognize Chiang-Kai-Shek, pull its troops out of China and Indochina and sign a multi-year non-aggression pact. The fact that Japan asked for a fortnight to consider such wildly unrealistic demands instead of rejecting them out of hand, rather argues that Japan was simply trying to gain time in which to launch military action.