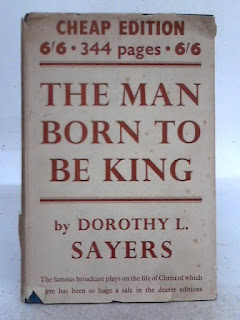 The BBC passed a significant milepost on its way to becoming the bugbear of traditionalist conservatives. It broadcast the first in a cycle of plays about the life of Jesus entitled the "The Man Born To Be King." There was nothing particularly objectionable in the narrative, but the timing just before Christmas was felt to be provocative, especially as the plays were broadcast in the Children's Hour slot. The mere fact that Jesus would be played by a human actor and the dialogue would be in modern English was held to be blasphemous. The title emphasised the humanity of Christ and not his divinity. Britain's then small atheist community were also annoyed at what could be seen as Christian propaganda. The author was Dorothy L. Sayers, now best known for the Peter Wimsey detective stories, but also a considerable literary scholar, highly successful adverstising copywriter and a sincere Christian, albeit uncomfortable with the sanctimony of the established church. She declined the offer of a Doctorate of Divinty from the Archbishop of Canterbury as she saw herself as a writer and not a theologian. The play cycle was popular and was printed as a book.

Churchill had long recognised that US participation would be vital to winning the war and travelled to meet Roosevelt for the Arcadia Conference in Washington. Churchill's first goal was to head the US away from giving priority to the war against Japan. He found himself pushing at an open door as the President was already prepared to risk frustrating the popular clamour for revenge on Japan for Pearl Harbour by pursuing the war in the West.

Enraged at the success of the Soviet counter-attack Hitler dismissed Field-Marshal von Brauchitsch as commander in chief of the German army and took the job himself. Brauchitsch had suffered a heart attack after being subjected to especially vigorous diatribes from the Fuehrer when he proffered advice embodying elementary military principles. Even at this comparatively early stage of the Russian campaign, Hitler was retreating from reality. The move was essentially symbolic as the responsibilities of the job were nebulous and  Brauchitsch had exercised little influence; he was arguably the most contemptible of the generals who had been promoted as part of Hitler's divide-and-rule strategy towards the General Staff.