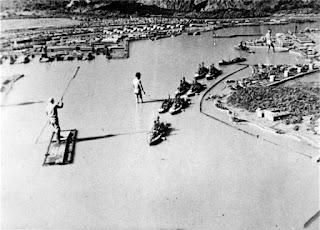 The British government proposed to extend liability for national service to almost all adults except for married women. In exchange the Labour Party began to agitate for the "conscription of capital", in other words the nationalization of industry. As privately-owned businesses were already operating under almost full government control, this would have had practically no effect on the management of the war economy. It was purely a political demand.

The Royal Navy force despatched from the UK to the Far East to deter possible Japanese aggression under a Cabinet decision reached  Singapore. It was poorly balanced and consisted of the new battleship Prince of Wales and the First World War vintage battle-cruiser Repulse, together with four destroyers. When war broke out with the Japanese attack on Pearl Harbour it was rebaptized as "Force Z". The legend became firmly entrenched that the aircraft carrier Indomitable should have joined the force but was unable to do so because she ran aground in Jamaica. There is no foundation to this; the two big-gun capital ships were expected to be a viable and effective force on their own. The lesson of the Mediterranean, above all the battle for Crete, that warships were vulnerable to air attack, appears not to have been held as relevant to Far Eastern waters.

Days before the Pearl Harbour attack Washington had been thown into a ferment by the publication in two isolationist newspapers of Rainbow Five, the plan  for an army of five million men and an expeditionary force to be sent to Europe. The leak was widely seen as an isolationist move to torpedo the President's moves to engage the US in the European conflict. The author of the army component of the plan, Major Wedemeyer was a noted isolationist (as was his father-in-law, another soldier) and he fell under suspicion. Whilst Wedemeyer was sharply questioned, the President showed no material anxiety to pursue the leaker (who was never discovered) which has led to the suspicion that the President himself organized the leak as a means of sending a warning to the Germans.

Like the British, the Americans were focused on the possiblity that Japan would attack the western colonies and interests in the west of the region. There appears to have been no serious consideration of the possibily that the Japanese might attack as far east as Hawaii, part of the US themselves. The Japanese fleet made its approach entrely undetected. There was ample intelligence - albeit much of it fragmentary or ignored -  of pending unheralded Japanese aggression, but none that pointed to the attack on Pearl Harbour. The British had thought one possible and seem to have warned the US, but it is a myth that Britain intentionally withheld intelligence to ensure the US entered the war. Roosevelt needed no prompting and had already set ample bait to provoke attacks by both Japan and Germany.

Just as the British had not learned from the effectiveness of German and Italian aircraft against Royal Navy ships, the US Navy had missed the implications of the British achievement in crippling the Italian fleet at anchor in Taranto by aircraft torpedoes. Some of the military severely under-estimated Japanese potential, in part for racist reasons; when General MacArthur learned of the Japanese success, he assumed that white mercenaries had piloted the aircraft.

In keeping with IJN signals procedure, the bombers signalled their success with a two syllable morse group, to-ra (totsugeki or attack, rakkan or looking good) repeated three times. When US analysts examined the signal logs after the war they misread this as the single word tora (or tiger). Thus the producers of the 1970 movie spectacular came to the exciting but not necessarily very historical title Tora! Tora! Tora!