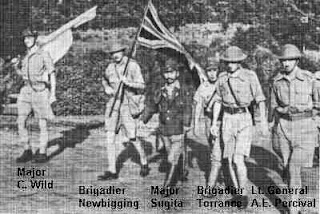 In the space of two days the British Empire suffered two immense military humiliations. They put Churchill's government to the sternest political test that it faced in its entire existence. Fortunately for him, there was no serious alternative as prime minister.

The fall of Singapore to the Japanese may well have have been Britain's worst military defeat ever;  it spelled the end of the Britain's prestige as the omnipotent power in the Far East, the representative of the superiority of the white races over the yellow races. It marked a turning point in the history of the British Empire. In the space of a week a numerically much inferior Japanese force had landed on the island fortress that was the symbol of British military and commercial power in the region and forced the surrender of 85,000 troops. Only in the air were the Japanese superior to the British. The British commander General Percival ignored Churchill's orders to fight to the last. British battle casualties of only some 5,000 suggest that resistance had not been especially intense.

The Germans launched Operation Cerberus, known to the British as the Channel Dash. It did not come as a suprise; British intelligence had been certain that the Germans would try to sail heavy warships from the western French port of Brest, where they were being bombed heavily by the RAF, eastwards towards Germany. Under Admiral Ciliax the battleships Scharnhorst and Gneisenau together with the heavy cruiser Prinz Eugen and a flotilla of lighter vessels sailed through the Straits of Dover unscathed by the frantic attempts of the Royal Navy and the RAF to stop them. The Germans had the advantage of appalling weather and a series of accidents that delayed British awareness that they had sailed for some hours. The British had also expected the Germans to attempt to pass the Straits at night, not at daytime as they did. The Times thundered that Ciliax had succeeded where the Duke of Medina Sidonia, the commander of the Spanish Armada defeated in 1588, had failed and the Channel Dash appeared to display British impotence. In reality it was a tactical victory but a strategical defeat. Hitler wanted the ships back in  German waters to fight off a British attack on Norway that existed chiefly in his imagination. They posed far less of a threat to British shipping than they had done from France.

The success of Cerberus had an entirely unforeseen consequence. The RAF had yearned to free itself of the task of attacking the German ships in Brest and resume its cherished mission of bombing German cities. It had been practically obliged to abandon this campaign in 1941 because it was being conducted disastrously ineffectively with few bombs falling anywhere near their targets. The RAF had finally developed the radio navigation aids that made a resumption feasible but would have had to overcome Royal Navy claims on its assistance but for the Germans bringing their ships out of reach of the British bombers. The RAF could thus issue a directive giving the primary mission of its bombers as attacking German civilian morale.

The Vichy regime under the personal instructions of Marshal Petain opened the trial at Riom of France's pre-war political and military leaders for "betraying the duties of their office." It was a blatant attempt to shift the responsibility for systemic failure onto a handful of individuals, who could then be punished as traitors. It failed abjectly; two former prime ministers, Leon Blum and Edouard Daladier, were provided with a public platform from which they were able to deploy considerable rhetorical skills to demonstrate the feebleness of the charges they faced. The Germans, who had not wanted the trial to take place, were appalled at the shambles.

The British public could console itself for Singapore and Cerberus with the news that the milk ration was to be increased from two to two-and-a-half pints of milk per week. The food minister Lord Woolton did, though, make this conditional, "if the  weather and the cows do their part."