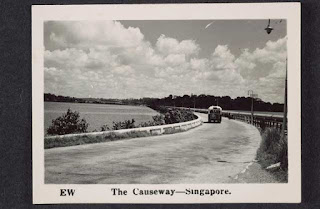 The Japanese conquest of the Malay peninsula was practically completed when the British withdrew across the narrow strait to the island of Singapore.  A thirty meter breach was blown in the causeway linking Singapore to the mainland. The fortress was now unmistakeably under siege. The mighty artillery that the Royal Navy had fought so long and so bitterly to have installed was sited to defend against attack from the open sea and kitted with armour-piercing shot to engage the ships of the Imperial Japanese Navy. It could not be trained on land-based attackers coming from the East. The squabble over defending Fortress Singapore had been one of the rounds in the savage battle between Admiral Lord Beatty and Sir Hugh Trenchard of the RAF, which had scarred Briish military policy in the 1920s.

The US general "Vinegar Joe" Stillwell was appointed as Chief of Staff for US troops to the Chinese ruler Generalissimo (as he had been baptized) Chiang Kai-Shek. The job was an immense fudge. Chiang wanted a docile American who would subordinate US and other western troops to his ineffectual campaigns against the Japanese whilst obtaining the maximum support possible. Stillwell was given local and limited authority over Chinese troops. In part the position was designed to avoid a repetition of the clashes between the British general Wavell in his short-lived and largely theoretical job as C-in-C of all western forces in the South-West Asia region. Stillwell fell well short of Chiang's ideal; Stillwell held him in great contempt. Stillwell, though, was even-handed: he held a similarly low opinion of the British.

Despite his tactical triumph in securing an almost unanimous vote of confidence in Parliament, Churchill still faced nagging criticism in British political circles. He devised a hollow manoeuvre to silence the critics. His ally, the widely distrusted Lord Beaverbrook who enjoyed no party support, left the War Cabinet, which was designed to appear as an erosion of the power of Churchill's personal clique. Freed of broad strategic tasks, Beaverbroook was thus free to undertake departmental duties as the newly created Minister of Production. Weaknesses in war production had featured largely in the complaints against the government's handling of the war that had been made in the confidence debate. In Churchill's playbook, Beaverbrook would repeat his achievements as Minister of Aircraft Production in 1940, when he supposedly helped win the Battle of Britain with output of Hurricane and Spitfire fighters. This was the politics of illusion. Beaverbrook's actions had contributed nothing to fighter output and his reforms destabilised and confused the system of aircraft production. Moreover, there was actually little more that could be done to coordinate national industrial production and Beaverbrook, anyway, had no aptitude for the grind of ministerial work.

Hitler delivered a speech on the ninth annniversary of the Nazi accession to power. He spelled out publicly his intention to murder the Jews by making the demented claim that they were engaged in an existential struggle to destroy the German race and that Germany would fight back:  "The result of this war will be the annihilation of the Jews." Other parts of the speech were reported in Britain but the remarks about Jews were omitted.