Eighty years ago a British raid serves a useful purpose 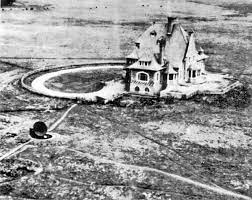 Members of Britain's recently formed parachute forces executed Operation Biting at Bruneval in Normandy. In contrast to other British raids on the coastline of German-held Europe which barely rose above morale-boosting military displacement activity, Biting had a clear and useful goal. British low-level photo-reconnaissance and radio wave monitoring had detected a German radar installation at Bruneval, sited close to a cliff and a usable beach. The operation aimed to seize equipment and personnel to gain a fuller insight into the defence measures that British bombers would have to overcome. The raid was a complete success and the paratroopers captured the important parts of short-range Wurzburg radar set and one operator. The hardware confirmed the technical quality of German radar and gave strong clues as to the rate at which it was being produced. The raid also led the Germans into the error of ordering all installations to be surrouned by barbed wire, which made them easy to detect from the air because of the distinct vegatation pattern along wire fences.

The raid also provided a small consolation  to British morale for the success of the Channel Dash. On a more concrete level, two of the ships that had participated were put out of action. Prinz Eugen was torpedoed by a Royal Navy submarine and Gneisenau was so severely damaged by an RAF bomb in dry-dock that she was never fit for action again. The commander of the near suicidal Swordfish torpedo bomber attack on the ships during the Dash itself, Commander Eugene Esmond, was awarded a posthumous VC.

A scratch force of American, Australia, British and Dutch ships attempted to disrupt the Japanese landings on the Dutch possession of Indonesia. It was comprehensively defeated in what was called the battles of the Java Sea and the Sunda Strait. The Japanese navy outnumbered and outgunneed the allies, who suffered from the problems inevitable for an improvised multi national force; only the British had radar.  They lost two heavy and three light cruisers; no Japanese warship was sunk although two troopships were. The invasion continued with barely a pause.

A British Parliamentary report disclosed severe problems in the coal-mining industry. Manpower had still not been fully restored after the exodus from the industry early in the war when the loss of export trade provoked one of its habitual troughs. Efforts to lure ex-miners back had only been partially successful and morale was not good as the wage system had barely changed from the volatile and ungenerous pre-war one. Some miners were appalled that their wives could earn more working in newly opened munitions factories than they could.