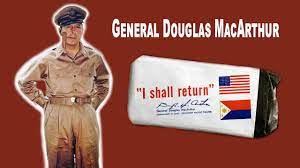 The US general who had commanded the failed defence of the Philippines, Douglas MacArthur, reached Australia where he issued his famous declaration, "I came through and I shall return." He had refused President Roosevelt's request to say, "We shall...". FDR awarded MacArthur the Medal of Honor, but this was merely part of a strategy to draw the fangs of MacArthur's seething political ambitions. Had Macarthur been (deservedly) sidelined because of his failure in the Philippines, he would have become a dangerous political opponent. The President, though,  had lumbered US strategy with the need to fulfill MacArthur's personal crusade irrespective of its military value. This left the US Navy and the US Army fighting practically separate wars in the Pacific.

The British foreign propaganda machine went through one of its periodic attempts to settle its inner contradications. The system of three-minister control was officially droppped, but this little more than formalise the Foreign Office's dislike and distrust of propaganda; its oversight had in practice been used as tool of negative control. The active management of the Political Warfare Executive was still disputed between the Earl of Selborne's ministry of Economic Warfare, which controlled the sabotage and subversion organisation SOE, and Brendan Bracken's Ministry of Information. Bracken loathed the arrangement but his deep personal loyalty to Churchill held him back from fighting more vigorously as another minister might have done.

The standard-bearer for the extreme left in British politics, Sir Stafford Cripps, did Churchill an unintentional favour by parlaying US anti-colonial pressure into the leadership of a mission to India to investigate paths to autonomy. He thus removed himself from day-to-day politics, squandering the political capital he had built up as, in the eyes of the public but not of Stalin, as the champion of the Soviet alliance. Non-one was going to win any worthwhile kudos from the mission. India meant little to the British public and and the internal dynamics of the region foredoomed any negotiated half-way house solution. Cripps's brief moment of opportunity to establish himself as an independent force in Westminster had gone.

Misery continuned for the British public. The clothes ration was cut by 25% and deliveries of coal - the dominant source of domestic heating - were reduced following the depletion of stocks needed for industrial power generation through the cold winter.