Eighty years ago the government cracks down on spivs 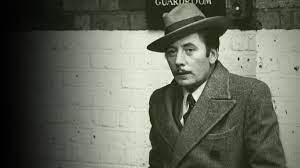 Government control over the economy was given an even sharper edge. Criminal penalties for black market activities were greatly increased. People convicted in magistrates courts could be fined £500 or more and imprisoned for a year and those by higher courts to 14 years hard labour or a fine of £5,000 or even more if the profit on the deal was particularly high. Black market activities were defined simply as anything that contravened government regulations on the supply of goods. In keeping with the near-disappearance of Parliamentary government, the new penalties were introduced by government edict amending Defence Regulations 55 and 90; quoting the correct regulation number was the closest that the government got to demonstrating the legitimacy of the decision. The Home Secretary wrote to magistrates - then still deeply implanted in local life - reminding them of their duty to eradicate the evil of the black market; they were to resist the temptation to condone behaviour that was almost universally practiced.

Having - probably wisely - refrained from closing down the Daily Mirror as a menace to Britain's war effort, the Labour Home Secretary contented himslef with the bluntly authoritarian messsage that if the newspaper persisted in "disregard[ing] its public responsibility and the national interest" it would be closed down under Defence Regulation 2D. He was lambasted by the habitual far left gadfly, Manny Shinwell, and more subtly by A. P. Herbert, the humorist turned MP. Ostensibly as a quite separate matter, Herbert suggested that the contribution of merchant seamen to the war effort should be properly recognised, which was a difficult proposition for the government to refuse. It had, of course, been a cartoon showing the plight of a torpedoed seaman that had caused the fuss in the first place.

The Nazi Party's own military force, the SS, appeared at the annual heros' day ceremony at the Berlin Zeughaus as a separate force, distinct from the conventional Wehrmacht army. In practice the military command structure was not affected but this did mark another erosion of the Wehrmacht's former pre-eminence. The SS was being expanded. It served as the umbrella for the recruitment of Volksdeutsche (an untranslatable euphemism for "as good as actual Germans") Balkans. Some of its motorized divisions became in practice full scale armoured divisions.

Emblematic of the antiquated futility of attempts to resist the Japanese advance through Burma was the British Empire's last recorded cavalry attack on enemy forces by a sixty man patrol of the Burma Frontier Force. It arose not from heroism but from a mistaking Japanese for Chinese troops. By the time this was recognized the horsemen had no option but to follow through. Most were killed.