Eighty years ago the Germans regain a potential ally but have to weather an embarassment. 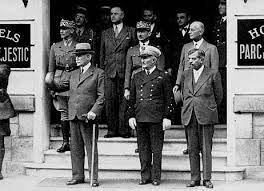 In one of the most tortuous and obscure episodes of the Vichy regime, Pierre Laval returned as prime minister, replacing Admiral Darlan. Darlan was generally counted to have been a failure and had enjoyed a pompous and luxurious lifestyle, which Petain found offensive. Petain had hoped to replace Darlan's government with traditionalists and technocrats, but his choices inspired no enthusiasm either amongst the Germans or the Americans, still tenuously at peace with Vichy. Laval displaced Petain in all the main functions of head of government leaving the Marshal as titular head of state. Darlan retained his position head of the armed forces.

The Germans might have gained a government more inclined to whole-hearted collaboration, but their refusal to make anything but token concessions to Vichy meant they could make little of this. Vichy was something of an embarassment to the Germans; its attempt to stage a show-trial of the generals and ministers of the Third Republic at Riom had degenerated into a spectaculat own goal in which the eloquence and adroitness of the accused politicians exposed cruelly the feebleness of Vichy's case and, by extension, the ludicrousness of its claim to be rebuilding France after the incompetence and corruption of the Third Republic. The trial at Riom was suspended, never to be restarted.

The Imperial Japanese Navy completed its humilation of the Royal Navy in the waters around Sri Lanka by sinking the aircraft carrier HMS Hermes. British intelligence now concluded that Sri Lanka could not be defended against a Japanese invasion and the main operating base of the Eastern Fleet was moved to Kilindini in Kenya. Fortunately for the British the IJN was operating at the limits of its capacity and its carriers badly needed overhaul; no invasion of Sri Lanka had been planned. The British still had two aircraft carriers available for forays east of Sri Lanka and did not completely abandon the eastern Indian Ocean.

Sir Stafford Cripps's mission to Indian ended in resounding failure. There was no agreement between the various movements, notably Gandhi's Free India group and Jinna's Moslem League. This was all the more embarassing as the British side had been pumping out hopeful briefings almost to the very end. Cripps left for London with nothing whatever to show for his trouble.

The Filippino and American forces which had surrendered after losing the battle of Bataan now paid the full penalty for their defeat. They were marched in sweltering heat through the jungle, subject to periodic random killings. Thousands died in what came to be known as the Bataan Death March.