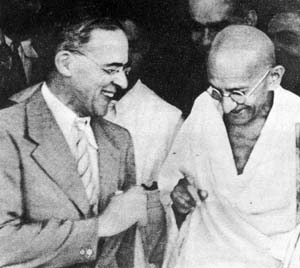 Sir Stafford Cripps's mission to India got off to an unpromising start. Ostensibly he hoped to obtain more active participation of India in the war effort by its political leaders, but how much extra he could have got is unclear. Millions of individual Indians were volunteering to serve in the various units of the India Army fighting the Axis powers, mostly under British officers. In reality his goal was more likely to have been to establish his credentials as a progressive politician by securing autonomy for the first non-white territory in the Empire. He was willing to promise privately that the conservative Viceroy Lord Linlithgow would be replaced and publicly that India would receive Dominion status (like Australia, Canada, New Zealand and South Africa) after the war. The most important Indian leader, Mahatma Gandhi, derided the latter offer as a "post dated cheque drawn on a failing bank."

RAF Bomber Command staged its first major raid since the directive giving the attack on civilian morale as its chief job was issued and, perhaps more important, Air Marshal Arthur Harris had taken command. It was a harbinger of things to come. Clear weather conditions and a distinct riverscape made it easy to locate the mediaeval port city Lübeck, which consisted mainly of wooden buildings and thus burned easily. After almost two years of press releases announcing the imaginary devastation of Axis cities, the RAF was delivering the real thing. (There was minimal damage to any war industry and Harris was entirely frank that his goal was to destroy the city even though it was not a vital target. He shrugged off casualties of 5.5% in the attacking force. The attack was carried out by about 230 Wellingtons and Stirlings; soon Harris would have many more of the far more potent Lancaster and Halifax bombers at his command. Coincidentally the Royal couple visited an aircraft factory and baptized two Wellingtons  George RI and Elizabeth R respectively. The air offensive against Germany was ready to take on an entirely new dimension with a Royal seal of approval.

A force of British commandos raided the French Atlantic port St. Nazaire and succeeded in putting the massive Normandie dry-dock out of action for the remainder of the war. An obsolete and expendable destroyer loaded with tons of explosive rammed the dry-dock gates and, some hours later than planned, exploded. The evacuation of the commandos by vulnerable Fairmile launches did not go well and about two thirds were killed or taken prisoner. It is an open question whether the goal was worth the sacrifice. The Admiralty appeared rather to be fighting the battle of the previous year in which Bismarck sought refuge in a French port to repair damage inflicted by the Royal Navy; it envisaged a similar scenario arising with her sister, the Tirpitz.  It thought the raid would deter the Germans from another sortie into the Atlantic by depriving them of the possibility of repairing her. As the Germans - humiliatingly for the British - had just withdrawn their major surface units from France by the Channel Dash, another Atlantic operation was a rather remote possibility. The potential boost to Britain's bruised domestic morale cannot have escaped attention. When he was first alerted to the attack, Admiral Doenitz, the German U boat commander, had assumed that the objective was St Nazaire's submarine pens, which went entirely untouched. Given the finely balanced Battle of the Atlantic these might have been a more worthwhile target, but they were (and still are) sited far deeper in the port.

The US chiefs of staff, whose forces would bear the brunt of the fighting, divided the eastern Pacific area into the Pacific Ocean Area and the South West Pacific Area. In practice this formalized a divided strategy under which the fomer under Navy command set out to roll the Japanese back to their home islands and the latter under General Douglas MacArthur conducted a personal and political crusade to reconquer the Philippines.