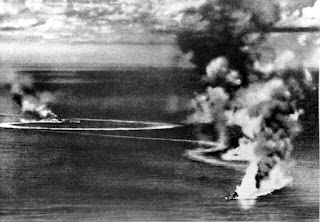 The Japanese attack on the British Empire reached across the Indian Ocean in the form of task force based around three aircraft carriers sent to mount  a strike on the Royal Navy base on Sri Lanka. The British had advance warning and were able to sail their major units - three aircraft carriers and five battleships - out of harbour before the Japanese aircraft struck on the morning of Easter Sunday so the damage achieved by the first phase of the operation was limited. Heavy casulaties were, though, inflicted on the defending aircraft. The Japanese located and their aircraft sank two British heavy cruisers, Cornwall and Dorsetshire, in a small scale version of the sinking of Force Z. The Japanese did not intend to invade Sri Lanka but their success provoked a major panic.

The British set out to outdo the spectactular acheivements against St Nazaire of Operation Chariot with another major commando operation further south in the Gironde estuary. The original plan for Operation Myrmidon had featured the landing of no less than 3,000 troops with tanks, which were to disrupt German coastal communications. In the event the force was scaled back to 800 men including 100 French, with the object of destroying factories on the coast. A single French-manned landing barge commanded by Lt-Col de Chevigne overcame the first obstacle - a sandbar - but as none of the other barges followed, it retreated. One barge had to be abandoned under fire from German batteries, but there do not seem to have been any casualties.

The former head of the British Civil Service, Sir Warren Fisher, was  dismissed as Special Commissioner for the London Civil Defence region, a post he had held since the outbreak of war. He had publicly  criticized the Home Secretary Herbert Morrison in a letter to the Manchester Guardian. Morrison had punished a senior fire officer for allowing a fire engine to be used to transport a fireman's  football team to a match against another region. Given the near-absence of German air raids for almost a year, Fisher labelled this as grossly disproportionate; tact had never been his long suit and he had made many enemies, but it was a sad end to long and distinguished public service.