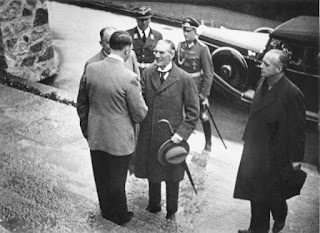 Neville Chamberlain’s first visit to Germany to meet Hitler proved to be remarkably brief. The only business of substance was a three hour conversation between the Führer and Britain’s prime minister at the Berghof. The only other person present was the chief interpreter of the German foreign office, Paul Schmidt. This was deisgned to ensure the “personal” character of the talks although there was no-one in the British party whose knowledge of German would have been sufficient for the task. Too many of the Foreign Office’s German speakers had reservations about appeasement to be included in the group.

It was agreed to resume the talks on more specific topics in a few days time. As a special gesture of consideration to Chamberlain Hitler decreed that these talks should take place in western Germany to spare the prime minister the rigours of another long flight. Bad Godesberg on the Rhine was fixed as the venue. Only the German and British governments would take part in the talks. The future of Czechoslovakia had been taken from the hands of the government in Prague.

There was further confirmation that it was the British government in the driving seat on the side of the democracies when the leading ministers of the French government flew to London to discuss the crisis. Little of substance emerged about the talks beyond a general sense that the French too preferred a negotiated settlement. It was plain to the British ministers that the French were desperate to find a way out of their treaty obligation to defend Czechoslovakia and a deal brokered by Britain would fit the bill nicely.