Eighty years ago, Hitler disappoints the pessimists, Chamberlain astonishes and delights with a flourish of melodrama and the butchery continues on the Ebro. 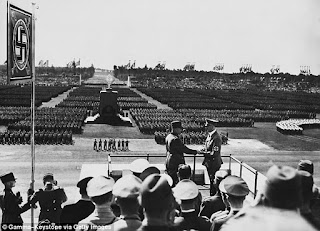 Hitler made his long-awaited speech at the Nuremberg Nazi party rally. Even though no settlement had been reached in Czechoslovakia, the worst fears of many observers especially in the UK were not realized. Hitler did not announce imminent violent steps to aid the Sudetens which would probably have triggered war. He certainly spoke firmly in their interests and complained of the “oppression” by the Czechs, but the avenue of negotiations to address their grievances was not closed.

The response of the British prime minister Neville Chamberlain was astonishing. He asked Hitler for a personal meeting to try to resolve the issue and was willing to travel to Germany immediately if Hitler agreed. Hitler had little choice but to agree. The news brought a surge of optimism and admiration for Chamberlain. Chamberlain was 69 and flying was still considered something of an adventure. Under the melodramatic codename “Plan Z” the scheme had been prepared a few days before by a handful of trusted insiders as a last-ditch move to avert war. The insiders included Sir Horace Wilson, who would be accompanying Chamberlain on the mission. Wilson had been Chamberlain's closest adviser since the start of his premiership, although he was practically unkown outside Westminster and Whitehall. In the general amazement over Chamberlain's initiative few tried to puzzle why a civil servant with a background in labour negotiations should be picked for such a vital diplomatic task.

In heavy rain the slogging match of the battle of Ebro in Spain continued. Franco’s forces continued to drive in the perimeter around the Republican salient where the earlier offensive had run out of steam. Combat conditions resembled the worst attritional fighting of the First World War with heavy, concentrated artillery bombardments and brutal infantry assaults. Casualties were enormous. Franco could afford the losses; the Republicans could not.