Eighty years ago, a distinguished English lady takes tea with Senora Franco, the British trade unions support rearmament and the Nazis achieve a fusion of themes 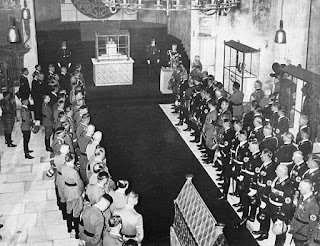 Ivy Lady Chamberlain, widow of Prime Minister Neville Chamberlain’s half-brother, Austen, made a widely reported tour of the Nationalist controlled areas of Spain. She was entertained by General Franco’s wife at her country house and expressed herself impressed with living conditions in the areas she had seen. The implicit endorsement of the insurgents was plain, but this time she was not the unofficial emissary of her brother-in-law. When she had visited Italy the year before meeting Mussolini and Count Ciano his foreign minister she had actively worked to promote Neville Chamberlain’s policy of rapprochement with the dictator states. Lady Chamberlain’s visit still provided helpful propaganda to Franco whose regime was not recognised by the British government. A British subject held on suspicion of currency irregularities was released from gaol as a small thank you.

Opposition to rearmament by the left in British politics retreated another small distance in the face of the growing crisis over the Sudetenland. The TUC congress meeting at Blackpool overwhelming endorsed its leadership’s acceptance of government invitations earlier in the year to discuss supporting the rearmament programme through measures such as more flexible working. The General Secretary Sir Walter Citrine told delegates that the time had come “to stand up to aggressors.” A few days before he had led the National Council of Labour to meet the Prime Minister at Downing Street for a briefing on Britain’s urgent need to rearm.

Hitler arrived at Nuremberg for the Nazi party rally. One of the smaller but symbolic benefits of the Anschluß with Austria could be announced. The regalia of the Holy Roman Empire which had been removed to Vienna by the Hapsburgs in 1809 in order to keep it out of the hands of Napoleon was to return to Nuremberg. The Holy Roman Empire had been dissolved in 1806 but this sent a powerful signal that the Third Reich had every intention of asserting its sovereignty as its ultimate successor. The meance to Czechoslovakia, which consisted of former Habsburg lands, was unmistable.The ceremonial handover was conducted by Arthur Seyss-Inquart, Nazi governor of Austria, at the Katharinenkirche, the church of the Nuremberg Meistersinger which features in Wagner's opera.