Eighty years ago, Chamberlain returns from Munich with two pieces of paper. He is very proud of one. 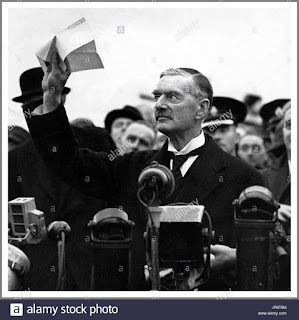 The crisis over the Sudetenland reached its conclusion with the last minute four power conference at Munich. In the course of a single sitting that lasted well past midnight Britain, France, Germany and Italy decided that Czechoslovakia was to cede the area to Germany and signed a treaty accordingly. The only concession wrung out of Hitler was a small extension of the timescale for the transfer. Representatives of the Czech government were present at the Fuehrerbau Nazi headquarters in Munich but were only informed of their country's fate once it had been decided. The man who brought them the news was Sir Horace Wilson, personal advisor to prime minister Neville Chamberlain.

The following morning Chamberlain visited Hitler at his relatively modest flat bringing with him a sheet of paper that set out a declaration that Britain and Germany would live together harmoniously from thenceforth. He had prepared this entirely on his own inititiative, taking neither advice nor informing anyone else in advance. Hitler had little option but to sign the document. This was the piece of paper the Chamberlain brandished triumpahntly on his return to London claiming that it meant "peace for our time."

There were wild celebrations in London and Paris as the statesmen returned. War had been averted and no-one thought of the price and most were content to share Chamberlain's optimism. In a dramatic departure from normal protocol King George VI invited Chamberlain to appear on the balcony of Buckingham Palace along with the Royal family to receive the acclamations of the crowds. The French prime minister Daladier took a rather more realistic view in private and muttered mainly to himself as his car drove through the cheering crows, "Ah, les cons, si ils savaient." (the fools, if only they knew).

The only significant dissent came from a member of the British Cabinet, Duff Cooper the minister for war who resigned almost immediately. He had little political weight and the press paid little attention.