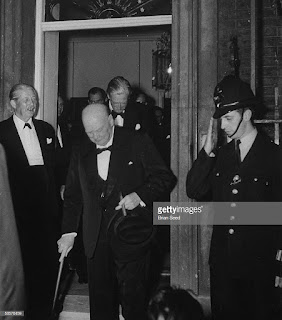 Over three days Parliament debated Neville Chamberlain’s diplomacy that led to the Munch agreement. The first was only noticeable for the restrained resignation speech of Duff Cooper, the only member of Cabinet to give up his position in protest. There was some concern in the government that there might be a significant rebellion in its ranks but in the end only a handful of MPs abstained and Chamberlain secured an overwhelming victory. The abstainers, though, were writing the future of Tory government for the next quarter century. They included the next three Conservative prime ministers, Churchill, Eden and Macmillan. It marked the moment that the first two, each heavyweights in their different ways, moved into internal opposition to the prime minister. Chamberlain had enjoyed a huge triumph at Munich but, invisible for nearly another two years, the tide of history had turned against him.

With perfunctory explanation the withdrawal of 10,000 Italian “volunteers” (in reality regular army units) was announced from Spain, perhaps a sixth of those engaged. A blizzard of obfuscating commentary from Rome attempted to distract observers from the suspicion that this wasa precondition for the still-awaited ratification of the Anglo-Italian Easter agreements. These anticipated the de jure recognition of the conquest of Ethiopia (“the Italian Empire” in Mussolini’s phraseology) but this had yet to be granted. Rome was keen to avoid the suggestion that the size of the withdrawal was calibrated to count somehow as meaningful progress towards disengagement in some diplomatic formula that would have to be resolved for Mussolini to receive the prize of recognition. Pride argued against admitting to being obliged to meet the Italian part of the bargain before the British met theirs. This was the end run to the process of negotiation that Chamberlain had forced Eden’s resignation to set in motion the previous February. The withdrawal was a pitiful reward for British appeasement, however reluctant Italy might be to acknowledge it.

The curve of violence moved upwards in Palestine. 19 unarmed Jews including women and children were slaughtered at Tiberias. There were also attacks on British forces. This all came at a convenient moment for Hitler who was always happy to pepper his speeches with references to British embarrassments in Palestine if London showed the least inclination to take a moral high ground as the German occupation of their spoils from Munich might have encouraged them to do..