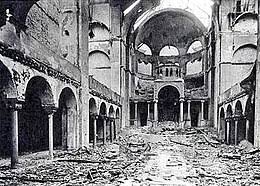 As the remaining Jews in Germany had feared, retribution for the attack on von Rath in Paris came soon and it was terrible. Orchestrated by propaganda minister Josef Goebbels, Reichskristallnacht (Crystal night) was one of the largest pogroms ever unleashed. Synagogues were burnt and Jewish owned shops were vandalized throughout the Reich. Dozens were killed and hundreds were arrested. It was followed by legislation that in practice stripped Jews of everything that they owned. The US was the only country to make any noticeable protest, withdrawing its ambassador “for consultations.” Neville Chamberlain complained privately that the atrocity might hamper his policy of appeasement and moaned that he might be forced to have to come close to criticizing Germany in public.

Mussolini finally reaped the harvest of Chamberlain’s policy of appeasement. The Anglo-Italian agreements signed at Easter finally came into effect as the withdrawal of some Italian troops from Spain triggered the final clauses. Lord Perth, the British ambassador in Rome, Lord Perth handed over to Count Ciano, the Italian foreign minister, his new Letters of Credence addressed to the King of Italy and Emperor of Ethiopia, thus acknowledging formal recognition by Great Britain of the Empire, in other words Italy’s conquest of Ethiopia. Nine long months before Chamberlain had forced his foreign minister Anthony Eden to resign in order to set the ball rolling in this direction. Britain had obtained nothing in return.

The government’s mastery of the House of Commons made itself felt. A Liberal amendment calling for the creation of a “Ministry of Supply” was soundly defeated despite the support of Winston Churchill. The name was a euphemism for the “Ministry of Munitions”, in other words a shorthand for a move to wartime economic conditions. In Chamberlain’s mind the Munich declaration had removed the threat of war, so the economy should move back to full peacetime conditions. He was also given the opportunity to squash any suggestion that Sir Horace Wilson might not be the proper person to advise him on foreign affairs. Civil servants were there to advise ministers on anything they were told to and it was, furthermore, deeply improper even to mention them by name in Parliament. His answer was wildly applauded by the government benches. In reality Wilson had acquired the status of privileged adviser on every topic under the sun and was an enthusiastic supporter of appeasement. He knew nothing of foreign affairs.