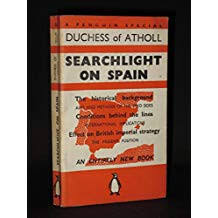 The Duchess of Atholl applied for the Chiltern Hundreds and announced she would fight an immediate by-election in Kinross and West Perth, which she had represented as Unionist M.P. since 1923, standing as an independent. She had resigned in protest at the government’s foreign policy. She was something of a maverick having enthusiastically supported the Spanish Republicans unlike almost all government MPs. She had published a book defending the Republic, earning her the nickname of the "Red Duchess."  The opposition parties did not field candidates leaving the by-election as a straight race between the Duchess and the official government candidate on the question of appeasement. The scene was set for what was later described as the dirtiest by-election ever fought.

France’s Front Populaire which had been leading an ever-more shadowy existence was finally dealt a death blow. In protest against worsening labour conditions, the Communist CGT union called a general strike. It proved an abject failure. Edouard Daladier’s centre-right government responded brutally with the arrest of hundreds of strikers particularly those in the public sector. The strike collapsed after barely a day.

In a speech to a Nazi Kraft durch Freude (strength through joy) cultural symposium the propaganda minister Josef Goebbels addressed the question of what was acceptable as humour and what was  not. He claimed to be tolerant of light-hearted and inoffensive political humour, with the assertion that the National-Socialists were not over-sensitive, and in case of need had jokes with which to defend themselves. However he fulminated on jokes that touched “the holiest matters of the national life.” “Why not” he suggested “make jokes against the Jews to repay those they told against the Germans?”