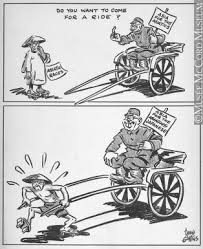 The Japanese began to roll out a specious vision of solidarity amongst Asian races as a justification for their policy of naked conquest and domination. Their “New Order” in north Asia was supposedly intended to bring together non-whites in the region to protect their interests against the western powers. It came two years before the Nazi "new order" for Europe but the Japanese phrase has faded from memory whilst the Nazi one took firmer hold. The prime minister Prince Konoye made a “peace offer” to the Chinese government which was the targeted launch customer for this racial-diplomatic scam. The Chinese were invited to join the anti-Comintern pact and to recognise the Japanese puppet regime in Manchukuo. Japan fielded out a tame Chinese called Wang who was a leading collaborationist in Manchukuo as an advocate of the treaty. Predictably nothing came of this overture, but the “New Order” served as a basis for the “Greater Asian Co-Prosperity Sphere” which was to serve as a propaganda cloak for Japan’s attempt to conquer the whole region two years later.

Not to be outdone by the efforts of the Spanish Republic’s quasi-communist government in unearthing huge and imaginary spy-rings, General Franco announced the discovery of a conspiracy involving the port of San Sebastian where the British Consul was somehow implicated. Hundreds of suspects were arrested. In rather closer proximity to the real world, the Nationalist army launched a major offensive against the remaining Republican enclave in Catalonia. Nationalist forces deployed along practically the whole frontier of Catalonia. These included a large contingent of Italian “volunteers” who served as a painful reminder that the British had recognized the Italian empire in Ethiopia on practically false pretences. Mussolini had withdrawn some troops as a small quid pro quo for recognition but clearly the remaining troops were still fully engaged. The Blackshirt involvement in the offensive was given full coverage in the Italian press as if to ram home the poor bargain that Chamberlain had obtained in his desperation to appease Fascist Italy. As had happened at the Battle of the Ebro, Franco’s objective appeared to be to create as large a battle as possible to inflict the maximum casualties on the Republicans. Capturing territory took a distinct second place.

Tension between Italy and France was ratcheted up by Italy’s formal denunciation of the Mussolini-Laval treaty of 1935 which had given some recognition to France’s possession of Tunis and Djibouti which Italy was now claiming. France despatched 1,000 Senegalese troops as a token reinforcement to its forces in Somaliland which bordered on Ethiopia. This was all the more unfortunate for the visit to Rome of Chamberlain and Halifax. The notion was being enthusiastically promoted in the Italian press that Britain could serve as a mediator in the dispute between France and Italy. Rather than driving some kind of wedge between Italy and Germany – the far-fetched target for the visit – it looked as though it would drive a wedge between Britain and France.

The Duchess of Atholl was defeated in the by-election she had triggered as a vote on the government’s foreign policy. Her failure had as much to do with the lacklustre campaign she had conducted, which failed to mobilise the voters of the traditional opposition parties which hadn’t fielded candidates leaving the field clear for the Duchess, and dislike at her support for Republican Spain. The Conservative candidate had conducted a brutally savage campaign against the Duchess.