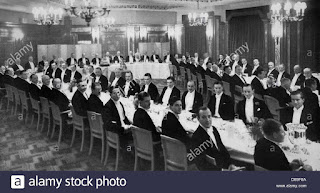 Quite by accident Neville Chamberlain delivered a speech that delighted its mainly anti-appeasement audience which proceeded to hi-jack the event for their own ends. In itself the occasion was innocuous: a formal dinner given by the Foreign Press Association. It was the Germans themselves who made the largest contribution to transforming the occasion into a near anti-Nazi demonstrationevent. At the last moment they had taken umbrage at some barely contentious comments by the Prime Minister. His predecessor Lord Baldwin had been savagely attacked in the German press for his rather tame remarks when launching a fund to support Jewish refugees from Nazi Germany and Chamberlain had defended him. German correspondents and diplomats pulled out of the dinner at the last moment leaving a good number of glaringly empty places. The audience then proceeded to treat Chamberlain’s bland speech as though it was an aggressive affirmation of the democracies in opposition to  Nazi Germany. His references to Anglo-German friendship were heard out in near silence. A statement that Britain would stand by France was treated to sustained applause which became hysterical when he emphasised that Britain and France were close. A passing reference to the recently signed trade agreement with the US provoked frantic cheers.

German press articles made plain that the recent swathe of anti-Jewish measures were intended to force Jews to emigrate for their good and that of Germany. As a special concession it was accepted that the Jewish community might be allowed access to securities held mandatorily in blocked accounts at German banks to pay the imminently due first instalment of RM250m of the RM1bn fine imposed on them.

Hjalmar Horace Greely Schacht, the President of the German Reichsbank paid an unusual visit to London. Its declared aim was to permit discussion with Montagu Norman, Governor of the Bank of England. Norman and Schacht were accustomed to talking at the monthly meetings of the Bank for International Settlements in Basel, the bank for central banks that the two men had been instrumental in founding and to which they devoted considerable attention. Montagu had missed the last few meetings, in part because of illness, and wanted to make this good. The close ties between the two men were also of interest to figures in the British government, notably Sir Horace Wilson a close collaborator of Norman’s,  who were musing over ways to improve relations with Germany.