Eighty years ago, Hitler enlightens his henchmen in Danzig and London is plunged (a bit) into darkness 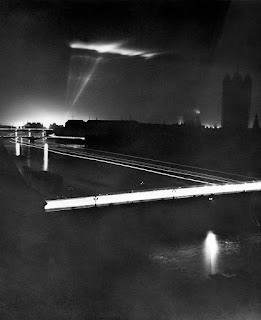 There was a disturbing echo of the Munich crisis a year before, when Albert Forster the Nazi Gauleiter of Danzig and Zaske,  his propaganda chief, were summoned to meet the Führer at Berchtesgaden, in the same way that Konrad Henlein had been called to receive his final instructions before triggering the final moves to sever the Sudetenland from Czechoslovakia. Hitler had already declared a “war of nerves” over Danzig, but his discussion with his subordinates in Danzig translated almost immediately into ever more provocations directed at the Polish authorities. Just as they had awaited Hitler’s speech at the Nuremberg rally in mid-September 1938 as the likely trigger for the final moves, London now looked to his speech marking the 25th anniversary of Germany’s victory over Russia at Tannenberg on 27th August as the moment when he would show his hand.

The British population were given an unmistakable sign that the government thought war might be close, in the form of a massive exercise to test black-out precautions in major cities, but it was conducted with certain traditional, reassuring British features. The exercise was put back from the first night it was due to happen because of weather conditions; heavy cloud meant that it would have been pointless. When it did occur, it became the occasion for an impromptu celebration, with dense crowds at Piccadilly Circus at 1.30am. Doubtless they were also attracted by the social possibilities that the black-out offered. Disturbingly for the authorities, discipline was poor and observers in aircraft overflying London were able to see bright lights at considerable distances. Fear of the Luftwaffe only went so far.

The headwinds that President Franklin D. Roosevelt faced in any attempt to bring the US onto the side of the democracies in Europe were clear when Senator Robert Taft declared he would present himself to be the Republican candidate against the incumbent in the Presidential election of 1940. Taft was ferociously isolationist and, as the son of a former President, had a high profile. In the event his views were too extreme for mainstream Republicans and the more centrist figure of Wendell Wilkie went on to secure the nomination. But the isolationist community was large, strong and well-organized; Roosevelt could not risk provoking it.