Eighty years ago, Italy has no answers for Germany and Britain blinks in the face of Japanese pressure 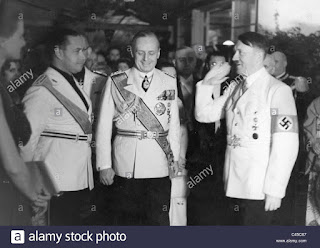 It was the British who blinked first in the crisis that had developed at the western concession in Tientstin in China. The Japanese blockade of the settlement had lasted some weeks and there was no sign that it was going to be eased; British subjects passing through the Japanese cordon were routinely subjected  to full body searches in an intentional humiliation by the Japanese army. After a few days of talks in Tokyo the British agreed in principle to hand over to the Japanese authorities the four Chinese citizens who were accused of the murder of a bank manager who collaborated with the Japanese. All the British got in return was that the outright murder charges against two of the suspects were scaled down to charges of complicity in the crime. The Japanese newspapers described the word with a compound adjective, which translated roughly as “hoary and crafty.” It is not clear why.

The Italian foreign minister Galeazzo Ciano visited Germany for discussions with his counterpart Joachim von Ribbentrop and then the Führer himself at his mountain retreat, the Berghof. It was widely recognised that they were talking about the attitude that Italy would take in the final phase of the crisis over Danzig which was imminently expected. Neither side made a public statement of what had been agreed or even the substance of the conversations, so there was fodder for both optimists and pessimists. In reality Hitler made entirely plain that was determined to take violent action against Poland and that Italy’s view on the matter was unimportant.

Intentionally or otherwise The Times made its last and ambivalent major contribution to the cause of appeasement. A leading article called for international mediation over Danzig but the following day another article described Danzig as a German city, which German and Italian newspapers seized on as a supposed denial of the first article. The Times was, of course, not an official organ of British government thinking, but was widely regarded as the mouthpiece of British thinking. The articles gave a useful pretext for contrasting resolute German policy with British indecision.

PS Catch the second episode of Channel4's new documentary series The Queen's Lost Family on Sunday at 8pm  https://www.channel4.com/programmes/the-queens-lost-family. It covers the abdication and features interviews with Adrian