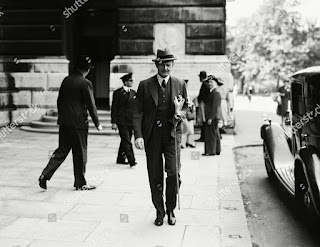 Hitler’s decision to invade Poland that he had revealed to his military commanders at the Berghof remained concealed, so the rest of Europe could only observe the outward signs of the final crisis: the last, open German demands on Poland, sundry German delaying tactics to keep its opponents guessing, the frantic attempts by other powers – above all Britain - to avoid a conflict and the more-or-less ambiguous moves by countries more usually friendly to Germany to reserve their positions. For outsiders there were still grounds for hope, but not optimism.

There was a crumb of comfort for the peace camp from the announcement by General Franco that Spain would remain neutral in any conflict. The German-Soviet pact was given as a pretext, but the ravages of the Civil War which had ended only a few months before, left Spain in no position to pose any threat to France or even to defend itself.

Italy’s attitude was harder to decode, but here too optimists had something to work on. The tone of rhetoric was pro-German but Mussolini made no public pronouncement of a firm intention to support Germany in any conflict. In private Mussolini had declined to be dragged into a war provoked solely by German aggression. He knew that Italy’s economy was too weak and potential gains were small. The much-vaunted Pact of Steel between the two Fascist dictators was made of considerably weaker material.

Almost unnoticed by anyone, Britain and Poland had been discussing the wording of a formal treaty to embody the unilateral guarantee that Britain – backed by France - had issued some months before. By chance the treaty was signed publicly the day before Germany planned to invade. It was signed by Lord Halifax, the British Foreign Secretary, and Count Raczynski, the Polish ambassador to London, and the signature itself at the Foreign Office had none of the flourish and drama of the Ribbentrop-Molotov pact. No photographers were present and the Count did not pose for this photo outside the Foreign Office, but the treaty still came as something of a surprise to the Germans and may have affected their moves.

At the shortest possible notice, German plans to invade Poland were put on hold. Mussolini’s craven back-tracking was the main cause, but the Anglo-Polish treaty played a part as well.

A mysterious German intermediary arrived in London about whose mission and doings nothing was disclosed; only his visit was known about publicly. Again, the optimists had something to work on. The man was Birger Dahlerus, a Swedish industrialist, with close ties to Hermann Goering. His name was garbled into a semi-official code-name in the British Foreign Office: “the Walrus.” In reality his mission was futile; Britain would offer him nothing that they would not offer formally to Germany and he spoke only for Goering. The only purpose of his journey lay in the competition amongst the Nazi leaders, not in any meaningful diplomacy. If the British buckled at the last minute, Dahlerus’s involvement would give Goering a pretext to claim the credit from Foreign Minister von Ribbentrop.

The IRA claimed its first fatal civilian victims in its “S Plan” bombing campaign in mainland Britain. Five people were killed and a further 70 injured in an explosion in the Broadgate shopping street in Coventry. The precise target of the bomb is the subject of the customary fog of contradictory claims, including one that the detonation was an accident. It was the worst terrorist attack in mainland Britain until the 1970s. The perpetrators were rapidly arrested.