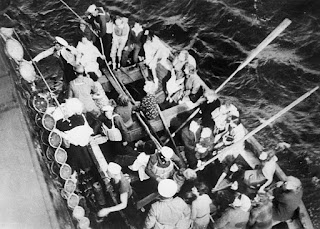 The first elements of Britain’s small expeditionary force landed in France, giving essentially symbolic support to France which would otherwise have to bear the burden of the war against Germany. The operation was widely mentioned on the French radio but the British had not quite decided whether it should be treated as a secret. In the event it was extensively reported in British newspapers, but the military authorities for some mysterious reason took fright and draconian censorship was applied retrospectively. The police visited newspaper offices and supervised a change in headlines; copies of uncensored newspapers were confiscated from startled commuters. This was one symptom of Britain’s intentional failure to prepare for war. The Ministry of Information, which was responsible for censorship and had an ambiguous responsibility for news management, had existed as little more than a paper planning exercise before the war. Downing Street’s key motivation had been to avoid doing anything that the Germans might have considered provocative and to prevent anything developing a momentum of its own. The result was a shambles.

The high command of the RAF had willingly accepted the political decision not to attack inland Germany, which was passed off as a high-minded choice to avoid civilian casualties. In reality it was quite incapable of mounting the “strategic” offensive against Germany industry and cities that its commanders had long held to be the force’s true raison d’être. The RAF did attack the German naval bases at Wilhelmshaven and Brunsbüttel, inflicting almost no damage. The bombers suffered only slight casualties, which served to give a dangerously delusive impression that they were capable of defending themselves.

The French army staged a series of limited local advances into German territory, which were given extensive publicity. This was pure propaganda. The French high command had decided long before that it was not going to mount a serious attack on Germany’s Westwall defences, because of a combination of sheer military pessimism and reluctance to incur anything approaching the level of casualties that France had suffered in the First World War. In practice Poland was left to fight alone. The Phony War had started.

More as a political gesture than anything else, the British government announced that it was prepared for a war that would last three years. In part this was intended to send a signal of resolution to Germany. It also showed that the British had no thought of a direct military victory over Germany. Neville Chamberlain too shied away from the human (and financial) cost  of offensive warfare and nourished the fantasy that Britain’s superior economic management would force Germany to concede when its leaders began to see the world through Chamberlain's eyes.

At sea Admiral Dönitz’s U-Boats were giving a better lesson in how the remainder of the war was going to be fought. The unescorted British liner Athenia was sunk by U-30 on a purely civilian voyage.  Over 100 passengers and crew died but that large majority were rescued. U-29 sent HMS Courageous to thee bottom with 500 of her crew. Courageous was a smallish, elderly aircraft carrier which had been tasked with hunting out U-Boats in a consciously aggressive strategy that was utterly flawed, offering targets to its intended victims with almost no prospect of actually finding them.