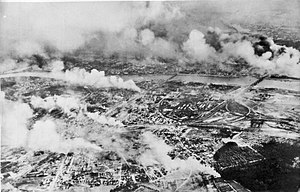 The Luftwaffe introduced Warsaw and the world to the full horrors of modern warfare. Under the command of Major Freiherr Wolfram von Richthofen it mounted the largest air raid yet on the Polish capital. 1,150 sorties dropped over 600 tonnes of bombs; tiny in comparison to the raids seen later in the war but terrifying nonetheless. The attackers – even including obsolete Ju52s – suffered negligible losses as the city was practically undefended. Von Richthofen was a cousin to the Great War flying aces of the same name; a telling register of how far air warfare had moved on from even the threadbare chivalry of its origins. The attack was intended to force the surrender of Warsaw but the city held out. Only intense direct shelling by the artillery of the Wehrmacht brought the siege to an end. Perhaps 20,000 civilians were killed. This was the end of the Polish campaign.

The expansion of the war into the Balkans cam a step closer when the Rumanian premier, Armand Călinescu, was assassinated by the Fascist Iron Guard. Călinescu had been a staunch opponent of the Fascist Iron Guard through his brief premiership which began in March 1939. He had already survived a number of attempts to kill him so his death was anything but a fluke. The assassins were backed by the Germans. The Iron Guard continued to gain ground politically although it never took control of the country and was eventually bloodily suppressed in an internecine dispute at the right of the political spectrum.

The critics of Chamberlain’s government found a convenient reason for attacks on in the form of the continuing ineptitude of the Ministry of Information, which was a glaring specimen of the half-hearted and ill-thought out preparations for war. The Ministry had displaced the Post Office as the government department in control of the BBC, taking a far more hand-on-stance than its predecessor. The number of governors had been cut from seven to two, creating the not-unjustified sense that the BBC was being transformed into a fully government-controlled, propaganda outlet. The Ministry had also taken to monopolising coverage of events such as a Royal visit to troops and banning normal journalists. A full scale Parliamentary debate was scheduled.