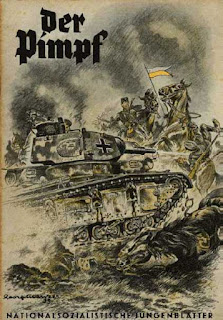 The Polish army launched a major counter-attack against the German invasion, which led to the largest and most bloody single battle of the Polish campaign, the Battle of Bzura. It saw the last full-scale use of cavalry as a battlefield arm, but, contrary to legend, the Polish cavalry performed effectively on the German flanks. The spurious image of horsemen charging tanks was an appealing one for German propagandists, keen to trumpet German superiority in all things. The thrust to the west of Warsaw did achieve some initial success but was quickly pushed back. The Poles lost some 20,000 men and the Germans 8,000. The Polish army fell back towards Warsaw, but the city was already practically surrounded.

The undeclared war between Japan and the Soviet Union in the east, which had reached its most intense in the full-scale battle of Nomonhan on the Khalkin Gol came to an end with s signed cease-fire. The Soviet victory at Nomonhan had played some part in persuading Stalin to sign the non-aggression pact with Hitler. The cease-fire was widely rumoured but was not admitted to. Thus ended the conflict between Japan and the Soviet Union until 1945 when Stalin decided to share the easy spoils of the defeat of the Japanese empire. It was conveniently ignored by those who later clamoured for the British and Americans to open a “second front” against the Axis that the Soviet Union had firmly ducked out of fighting the Japanese, leaving the western powers to bear the entire brunt for almost four years.

The removal of the Japanese threat on the eastern frontier was enough for Stalin to decided to stand by his secret agreement with Hitler and make absolutely sure that Poland was beaten. Under the thinnest pretexts imaginable – that Poland had vanished as a state and that the resulting instability threatened the USSR – the Soviets invaded from the East. The Polish army did its best – vainly – to resist and the Soviets quickly reached the demarcation line agreed in Moscow. Poland was partitioned for the fourth time.