Eighty years ago, Hitler proves that Chamberlain was wrong and Churchill was right 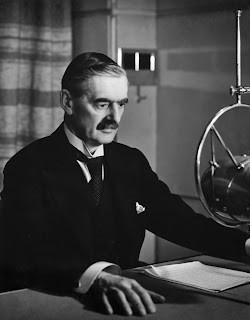 The thing that with hindsight now appears inevitable finally occurred. After twenty years of increasingly uneasy peace, Europe once again found itself at war. The immediate cause was the unprovoked German invasion of Poland on Friday  1st September. Germany took the token steps of presenting a sixteen-point “plan” to settle the status of Danzig and the corridor: in realty an ultimatum, which was designed to be rejected or ignored.  However Poland responded, it would have been invaded. No-one was fooled by the feeble pretext of fake attack on a German radio station at Gleiwitz mounted by the SS with murdered concentration camp prisoners as the casualties. There was little reason to hope that the Polish army could resist for long.

It took and embarrassingly long time for Britain and France to give substance to their guarantee of Poland against German attack. Mussolini offered mediation and Georges Bonnet, the appeasing French foreign minister, did his best to secure serious consideration for this patently insincere move, which it manifestly did not deserve. The British government did little to jockey the French along. It took publicly visible Parliamentary pressure and an invisible ministerial revolt to force Chamberlain on from nebulous talk of calling for Germany to withdraw from Poland to actually issuing a proper ultimatum. The Parliamentary pressure included Leo Amery’s justly famous three word revolt against his party when he called on Greenwood to “speak for England” and not just the Labour Party.

Chamberlain delivered his doom-laden broadcast to the British nation at 11am on the Sunday morning announcing that the ultimatum had expired with no response so “consequently this country is at war with Germany.” His listeners were invited to “imagine what a bitter blow it is to me that all my long struggle to win peace has failed.” Unintentionally he was making plain that appeasement had been very much his personal policy; he had imagined that it been crowned with complete success at Munich eleven months before and had gleefully reaped the illusory rewards that this had brought, but now he had to face the consequences of his failure to comprehend Hitler. There was no mistaking the defensive note in his claim that, “We have done all that any country could do to establish peace.” The war was the “fulfilment of an obligation”; nothing more visceral or stirring that that.

Soon after the speech the air raid warnings sounded, underlining the fact that Britain was now fighting a terrrifying, modern war. Chamberlain's policy had been shaped by his belief that Britain was hoplessly inferior to Germany and that London was vulnerable to speedy, devastating air attack. He was wrong. The air raid warning did not spell imminent destruction of the capital. The Luftwaffe had neither the equipment nor the intention to do this.

Chamberlain formed a War Cabinet from which it was impossible to exclude Winston Churchill who had so long and so fruitlessly argued for an alternative approach to Hitler. Perversely, the more obvious it became that his policy was misguided and failing, the harder Chamberlain fought to exclude Churchill from influence on policy. In his eyes Churchill was the threat to peace and not Hitler. The whole sorry tale is the subject of my new book Fighting Churchill, Appeasing Hitler which appears in just over a month.