Eighty years ago, Britain and France stumble towards folly in Scandinavia as whimsical spy-mania provides a distraction from the phoniness of the war 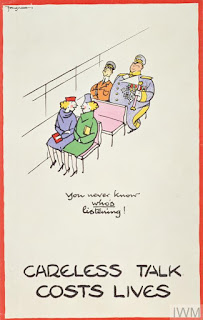 The British Ministry of Information launched one of the best known home front propaganda campaigns of the war. The posters advising the public that “Careless talk costs lives” were drawn by Cyril Bird (“Fougasse”) one of the best known illustrators of the day. The result was charmingly inconsequential with the whimsical notion that the higher leaders of the Third Reich might actually be stalking the land. It is unknown whether the campaign led to any reduction in gossip, but it aptly reflected the spy mania of period and the government’s mania for secrecy. (The contents of propaganda leaflets dropped in their tens of thousands on Germany was treated as highly confidential and not even disclosed to Parliament). In the absence of much real combat against the Germans, fighting phantom spies served as a distraction from the mundane reality of the Phony War.

Another reminder of the gentle pace of the Phony War came in the news that a German aircraft had been shot own on British soil for the first time in the war, although this distinction was not made explicit. It would rather have drawn attention to the fact that Luftwaffe activity over the mainland was insignificant. The fighter pilot responsible for downing the Heinkel 111 bomber was the then Fight Lieutenant Peter Townsend of 43 Squadron. Townsend went onto have a distinguished wartime career but is today best remembered for his relationship with Princess Margaret, whom he had met when he was equerry to her father. After the debacle over Edward VIII’s abdication to marry divorcee Wallis Simpson, Townsend’s position as a divorced man was a serious impediment in the eyes of the Windsors. Moreover as an equerry he was classed as a courtier, but sufficiently junior to blur into the domestic servants. The sixteen year age gap does not seem to have been much of a consideration.

As the day approached for the execution of the two I.R.A. members sentenced to death for their part in the Coventry bombing in 1939 which killed five and injured 70, no reprieve was forthcoming. In anticipatory retaliation, the I.R.A. planted bombs in mail bags in London, which caused some injuries. Coincidentally, one of the more junior British based I.R.A. members caught in the dragnet, was put on trial. The 16 year old Brendan Behan was sentenced to three years of Borstal, which launched him as a celebrity Irish freedom fighter and provided material for his writing, which did not down in the oceans of alcohol which made up his customary diet.

Neville Chamberlain went to Paris for a meeting of the Supreme War Council. In deep secrecy the Council decided that France and Britain would intervene in the Winter War on the side of Finland against the Soviet Union. This plan met two goals: appeasing the French right which saw an opportunity to push the war in an anti-Communist direction and Winston Churchill’s hazy projects to cut off supplies of iron ore to Germany from northern Norway. The latter was to be achieved as a collateral benefit of sending forces into the region. As a proxy ally in the war against Hitler, Finland had negligible value, but little thought was given to the possible consequences of going to war against the Soviet Union and potentially transforming it into a full-scale military ally of Germany.