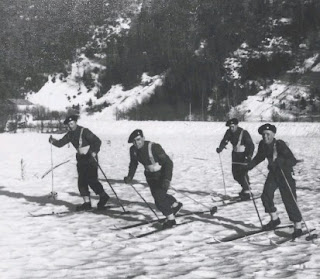 The sheer superiority in numbers that the Red Army could deploy against Finland started to tell. Soviet strength of almost half a million men outnumbered the Finnish army threefold. The Soviets launched a major offensive on the Karelian Peninsula which broke through the Mannerheim Line. Marshal Mannerheim ordered a retreat to fall-back positions. It was beginning to look like just a matter of time before Finland would have to concede.

The British government were confronted with a potential embarrassment when the extreme left wing Labour MP Denis Pritt asked a question in Parliament about his suspicion that the Finnish government was conducting what would be illegal activities in Britain to recruit British citizens to fight in the Winter War. Despite a privileged upbringing Pritt was a rabid supporter of the Soviet Union and was soon to be expelled by the Labour Party for publishing a book that defended Stalin’s invasion of Finland. There was no real substance to Pritt’s accusations but the 5th (Special Reserve or Ski) Battalion of the Scots Guards was being formed to take part in the planned Franco-British intervention on Finland's side. Unlike the French army which could field well-established and trained chasseurs alpins the British army had no winter warfare units. The operation was official, but highly confidential. The unit attracted volunteers from other corps who fancied a bit of cross-country skiing with an anti-Communist pretext.  The first task was to weed out individuals who could only offer snowshoe or lumber-jacking experience. The battalion trained at Chamonix which was familiar territory to many for its members. Fortunately for the government the initiative did not become public; fortunately for the volunteers the Winter War ended before the battalion saw action.

US President Franklin Roosevelt despatched his Secretary of State on a tour of European capitals to explore potential avenues to peace. The mission was undertaken with practically no hope of success. The true point of the exercise was to establish the US as a diplomatic force in Europe in a soft rejection of the vocal isolationism that was the chief source of domestic  opposition to him. By then it was an open secret that he was preparing for an unprecedented third run at the presidency and it was vital for him to develop a foreign policy stance that would steer between advocating outright US engagement in the European conflict, which would have been a gift to the isolationists, and weak toleration of Fascist aggression, which would have alienated his natural supporters.