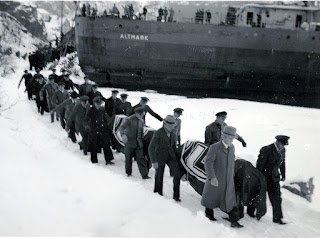 The Royal Navy’s stellar run of success against the Graf Spee found a worthy tailpiece when the destroyer HMS Cossack under her swash-buckling Captain Philip Vian tracked down the German tanker Altmark, which was taking 300 British sailors from ships sunk by the Graf Spee to imprisonment in Germany. Altmark took refuge in Josing Fjord in the then still neutral Norway but Cossack followed her and boarded her to liberate the British prisoners who delivered the celebrated cry, “The Navy’s here.” Eight German sailors were killed and their burial was exploited to the full in a propaganda exercise to depict the British as ruthless aggressors. The operation gave a great boost to British morale but helped bring the war to Scandinavia. The blatant infringement of Norwegian neutrality suggested that the delicate position of the Scandinavian nations counted for little in London even if the affair was relatively trivial.

Sweden gave a public affirmation of its neutrality in the Winter War whilst it and Norway were fending off a proposed, far greater encroachment from France and Britain. Stockholm openly turned down a request for military assistance from Finland against the Soviet Union. Privately both Scandinavian countries were resisting a request from the western nations to send their planned expeditionary force across their territory to fight with the Finns.

The IRA responded to the hanging of the two Coventry bombers who had murdered five people the previous years, with two bombs in London’s Oxford Street and Bayswater Road, again aimed at ordinary civilians. Twelve people were injured, two seriously. This proved to be the final instalment of the IRA’s “S Plan” campaign of bombing on mainland Britain, which had begun supposedly as an operation to sabotage infrastructure, but had degenerated into naked terrorism.

The five year old Dalai Lama was enthroned in a magnificent ceremony in a monastery above Lhasa in Tibet after his credentials to be the true fourteenth incarnation of the Dalai Lama had been established to everyone’s satisfaction. He had been exempted from the process of drawing lots from the Golden Urn, which had recently been introduced.