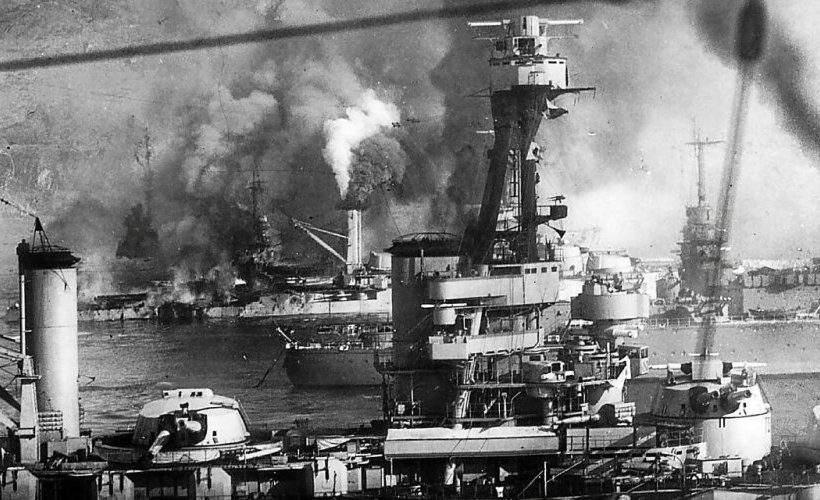 Since France’s armistice with Germany, Britain’s greatest preoccupation about its former ally had been the future of the powerful French fleet. London feared that it might be brought into the fight alongside the Axis powers in contravention of the terms of the Franco-British alliance. The Royal Navy launched Operation Catapult in which French ships in British controlled ports were taken over by force with some casualties but the most important part of the operation was at the large naval base at Mers-el-Kebir in French Algeria, where four battleships were at anchor including two modern fast vessels.  A powerful Royal Navy squadron blockaded the port and negotiations began over the future of the French ships. The outcome was one of the war’s saddest episodes. The French had no intention of handing their ships over to the Axis but could not find a formula that would satisfy the British ultimatum. The circumstances were confused and a question mark remains over whether the option of the ships sailing for French ports in the West Indies was fully explored; an acrimonious debate over the rights and wrongs continues to this day. Under the combined pressure of time and emphatic orders from London, Admiral Somerville the British commander launched an all-out attack, which killed 1,300 French sailors and sank or severely damaged many of the ships. The fast battleship Dunkerque escaped. When Churchill announced the attack to the House of Commons with manifest regret, he received an enthusiastic reception from all sides of the House, in contrast to the muted support that his still distrustful Conservative colleagues had given him before. France broke off diplomatic relations with Britain and launched token air attacks on Gibraltar in reprisal.

The Third French Republic has become a byword for intrigue, corruption and inefficiency; the military collapse of May 1940 is counted as history’s verdict on its failure. Its parliamentary representatives gathered at the Grand Casino of Vichy, the seat of the new government in the unoccupied zone. Of 952 senators and deputies, 652 were present and voted on the motion to bring the Third Republic to an end. Many of the remainder had decided to go into opposition. Of those present 572 voted in favour of transferring power to the “French state” under the authority of Marshal Petain who was to promulgate a new constitution to “guarantee the rights to work, family and the fatherland.” The new constitution never materialized and the new government remained a purely personal affair under the Marshal. The debate on the legitimacy of the Vichy regime has never closed but its formation opened divisions in French society which can still be detected.

The Luftwaffe began serious attacks against the British in what was called the Kanalkampf (battle of the English Channel). The British were still sailing merchant ships through the Channel within easy range of German aircraft. The RAF was ill-placed to provide cover. By some measures this marked the start of the Battle of Britain.

The British people were confronted with the full reality of total war: tea was added to the list of foods rationed, at the beggarly amount of two ounces (approximately 60 grams) per week. Restaurants were banned from serving “luxury” meals; only one fish or meat course was to be offered. Cake icing was banned.