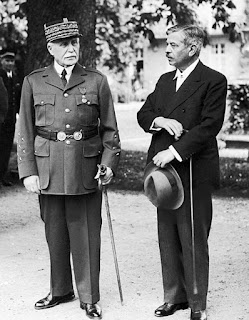 At the Democratic Party Convention in Chicago President Roosevelt manoeuvred to secure the party’s nomination to stand for an unprecedented third term. Roosevelt publicly denied any wish to do so but nobody took this seriously. Roosevelt faced the opposition of a significant bloc of non-interventionists led by Senator Burton Wheeler of Montana, who took particular exception to the fact that amongst the most conspicuous supporters of intervention were foreign-born (in practice Jewish) film studio heads. Wheeler had little prospect of blocking a Roosevelt nomination but it would have been better to bring him on side. To begin with Roosevelt tried to mollify Wheeler with a commitment not to send US troops to Europe, but Wheeler renewed his opposition. His flank was finally turned by securing the defection of two trade union leaders, who had been high profile supporters,  and Roosevelt was chosen by the overwhelming majority.

Marshal Petain had a far easier time consolidating his position of power in France. He improved on a distinctive feature of the French political system: the cumul des mandats under which leading national politicians hold a number of offices. Normally this involves a local elected job in the politician’s home region as proof that contact has not been lost with territorial roots, thus underpinning the claim to national level office. Petain went for three national level jobs: President of the Republic, prime minister and “Chief of the French State,” successor to the Third French Republic. Petain was supposed to embody a sharp break with the widely discredited Third Republic but his number two was the shifty and shifty-looking Pierre Laval, who had been one of its leading, if least attractive features, in the 1930s. Laval had twice been prime minister and had accumulated a sizeable private fortune. Insofar as Laval had represented any  positive policy or principle, it had been to cultivate Mussolini’s friendship as a counter-weight to Hitler. His deal with Britain’s Sam Hoare to condone the Italian invasion of Ethiopia in 1935 had been one of the less appealing episodes in pre-war diplomacy; Laval had been forced to resign and remained out of government until his ascent at Vichy. The Vichy regime’s claims to bring national renewal and purification looked questionable from the start.

The British had been working on the assumption from soon after Dunkirk that Germany would try to invade, but in fact it had taken some time for Hitler to make a firm decision. An abject, negotiated peace would have been preferable and Hitler was never hugely committed to the project. The Wehrmacht staff appear to have been the main enthusiasts, with its chief General Jodl having persuaded himself that the task was no more than a “river crossing on a broad front.” Admiral Raeder, chief of the Kriegsmarine, knew full well how hard it would be to defeat the Royal Navy, but he was overruled. Hitler signed Fuehrer Directive 16 to set invasion preparations in train. In contrast to the invasions of Poland and France, though, Hitler showed little interest in the planning and was more interested in installing long-range artillery to bombard Kent. Launching Operation Sealion, as it was baptised, was conditional on air and naval superiority. Neither Raeder nor Goering could guarantee that their service would deliver such superiority, but were equally keen to avoid the responsibility for aborting the project.