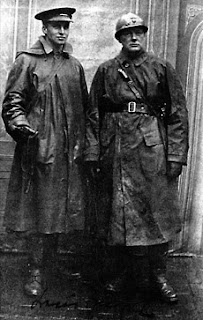 The oil spot of war continued to broaden, reaching the eastern end of the Mediterranean. With the Germans now securely lodged in Crete, the British feared a further extension of their power towards Egypt and the Suez Canal even though the intelligence was now pointing very firmly to an attack on Russia. The complicity of the Vichy French authorities in the Levant in German air support for the Golden Square revolt in Iraq created acute fears that the next step would be to admit a significant German military presence which could attack Egypt from the North. To pre-empt this British led forces launched an invasion of Syria and Lebanon. Any hope that the French colonial forces would abandon Vichy en masse were wide of the mark and the attackers encountered stiff resistance. Little more than a year after the Royal Navy’s partial destruction of the French fleet at Mers-el-Kebir, British and French forces were in full scale combat against each other. The defenders were no less resolute in fighting Free French troops who were also used in the attack, the only time regular French forces fought each other in open battle. Loudspeaker vans calling on their countrymen to defect to de Gaulle were greeted with insults and, in some cases, artillery fire.

The British government accepted a House of Commons debate on the loss of Crete. Having been put in power by a debate over another military fiasco, Churchill had little option. He put in a bravura performance as practically the only speaker from the front benches. Admittedly the government’s critics were far fewer, weaker and less credible than during the Norway debate. They were led by Leslie Hore-Belisha, sacked as army minister in January 1940 because his relationship with the generals had broken down, so he already seemed to be speaking as a disappointed careerist. Even more so when he attempted to defend his legacy. He gave Churchill little to worry about.

The Birthday Honours List featured two peerages: one burying the past, the other buttressing the present. Sir Robert Vansittart, the obsessively anti-German newly retired Chief Diplomatic Advisor, would be given free rein to comment publicly in a clear indication that his days of true influence – such as it was – were over; Churchill’s scientific advisor Professor Frederick Lindemann, became Lord Cherwell, shedding his embarrassingly German family name and reminding the public of his academic standing, such as it was. In practice the promotion acknowledged that Lindemann needed something to improve his standing to escape his status as Churchill’s pet. He was more a controversialist than a scientist and did some useful work challenging complacent preconceptions, notably over the appalling technological weakness of RAF Bomber Command, but his judgement could be severely flawed. Before the war he had championed his pet scheme of infra-red aircraft detection against radar. In a blatant piece of personal and political favouritism, Sir Archibald Sinclair, Churchill’s battalion adjutant on the Western Front and now ineffectual Air Minister, was made a Knight of the Thistle, the second highest ranked order of chivalry.

President Roosevelt took two more steps towards making the US a full-scale participant in the war. Foreign merchant ships lying idle in US ports were requisitioned to replace ships lost to U Boats in the Battle of the Atlantic. The regular army was used to break a strike at a North American Aviation aircraft factory working on large government orders. The strike was partly organized by Communists, who were obedient to Moscow’s line of hindering the war effort, which still had a few days left to run.