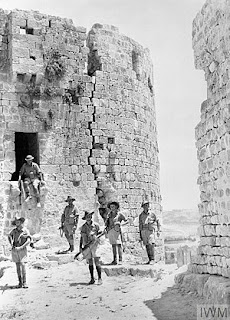 The British attacked Rommel’s forces in the western desert in an operation codenamed Battleaxe in their first significant offensive operation against the Germans. After weeks on the defensive as other commitments in the theatre, notably Greece and Crete sucked away resources, the move intended to relieve the garrison of Tobruk besieged since April. The British had been received over 200 fresh tanks brought by the Tiger convoy, replacing the bulk of the tanks lost in the advance into Libya and the subsequent retreat.  Churchill was especially attached to these tanks, which he referred to as his “Tiger cubs”, but over half were unreliable and poorly armoured cruiser class tanks, armed with only 2lb guns; there were also worthless MkVI light tanks. Churchill had high hopes of Battleaxe, but it was abandoned after three days with the loss of half of the tanks and 1,000 casualties. The British tanks were completely outclassed by the Germans’.

Vichy French forces put up stiff resistance to the British and Australian forces advancing up the coast of Lebanon. Pitched battles were fought successively at Sidon and Kissoué as the defenders were pushed back northwards through the ancient Crusader sites of the Levant. Unusually, the French made much of the scale of their losses so as to emphasise the supposedly treacherous nature of the attack. It remained an undeclared war and Britain and France conducted a mildly surreal diplomatic dialogue over the invasion. Vichy complained to the United States in guarded terms, denying that there had been any collaboration with the Germans in Lebanon or Syria: an interesting indication that collaboration had already become a term of abuse. Their note was also handed to Sir Samuel Hoare, the British ambassador in Madrid, with which both governments still had diplomatic relations. The British replied,  challenging the assertion and denying that Britain had any territorial designs in the area, wanting only to prevent the Germans establishing bases. The British looked forward to the restoration of “the independence and greatness of France.”

There was no such guarded language in the declaration signed in London by Britain, the dominions and the governments-in-exile of countries occupied by the Axis, including General de Gaulle’s Free French. They pledged to continue fighting until every country had been freed from occupation. The declaration featured a ringing call to resist brutal German oppression. The only concession to political calculation was that Marshal Petain was not named, given his continuing good reputation with many French people, His prime minister Admiral Darlan, though, was described as “frisking” at Hitler’s side.

Ultra intelligence alerted the British to the fact that the German pocket battleship Lützow – previously Deutschland but renamed as Hitler spotted the potential propaganda effect were she to be sunk – was at sea off Norway. She was found and torpedoed by a Beaufort of Coastal Command, suffering severe damage which took six months to repair.