Eighty years ago, Hitler launches the largest military operation ever to destroy the Soviet regime 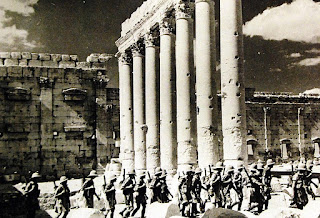 After weeks of news headlines dominated almost exclusively by domestic sport and industrial output, Moscow radio turned its attention to military matters and reported exercises across the Soviet Union devoted to getting the army into “fighting trim.” The previous rather unexciting editorial line had been determined by the desire of the Soviet leader not to do anything that might be taken as a provocation by Hitler. Rather like Neville Chamberlain in August 1939, Stalin clung to the hope that there would be peace with Germany until the very end. Unlike Chamberlain, Stalin had the power to exterminate any of his citizens who threatened this delusion, so the rule was rather more widely and fully respected. When Britain passed on entirely reliable intelligence that an attack was imminent, Stalin treated this as a malicious attempt to set him at the throat of his fellow dictator. German deserters who warned the Soviets of the coming attack were shot as provocateurs. The build-up of German forces on the Soviet border had grown to a scale that this was being reported in mainstream western newspapers, so there was little doubt as to what was coming.

At the senior levels of the German army, it was well known that an invasion of the Soviet Union was coming, but at more junior levels so degree of security was preserved. The cover story that the Soviets would allow the German army passage through their territory  to attack the British in the Middle East gained some credence. Hitler had presonally selected the codename for the operation, Barbarossa, after the nickname of the Holy Roman Emperor Frederick I, who passed as a unifying figure amongst the German peoples and a great crusader. It was the largest military operation before or since, involving three million men. After more than two years of uninterrupted, easy triumphs, the German commanders were supremely confident despite the magnitude of the task that faced them; there was no pre-set stop-line, Moscow was a natural objective but this was not necessarily the final one. The overriding aim of Barbarossa was to destroy the Soviet regime and Jewish-Bolshevism.  The Germans attacked along the whole length of the frontier and caught the Soviets almost entirely unprepared. The same rules had applied to military preparations as press coverage.

The western powers immediately offered to support the Soviet Union. Like so many of his most quoted comments, there is no established source for Churchill’s oft-repeated  claim that, “If Hitler invaded hell, I would at least make a favourable reference to the devil in the House of Commons”, but it captures the enthusiasm with which this former, vehement anti-Communist espoused the cause of defending the Soviet Union. Churchill certainly referred to Hitler as a “bloodthirsty guttersnipe” in a radio broadcast in which he correctly identified  this as one of the clear turning points of the war. This was considered extremely vulgar in certain conservative circles.

As the British armies moved northwards towards Damascus, they launched another prong to their invasion of Syria with an attack from the East using units of the army in India under the command of General William Slim, a former Gurkha officer destined to become arguably the country’s best general of the war. Their first serious engagement with the Vichy French defenders was at the ancient desert city of Palmyra, where a unit of the British led Arab Legion forced the defenders to surrender