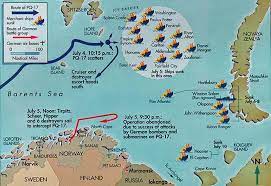 Britain suffered one of its worst maritime defeats of the war when convoy PQ17 carrying supplies to the Soviet Union suffered huge losses at the hands of German aircraft and U Boats: 24 out of 35 merchant ships were sunk. The disaster occurred because of a misjudgement of intelligence and German intentions which created a firm belief that the battleship Tirpitz would sortie and attack the convoy. This led to the Admiralty sending orders for the covering force of cruisers to be withdrawn and then for the convoy to scatter. The orders came directly from Dudley Pound, the First Sea Lord, an old tired and desperately ill man.  with almost no night at the high latitudes the German forces had little difficulty picking off the isolated merchantmen.  Tirpitz never made her sortie. Stalin believed that the British were lying over the scale of losses to excuse sending fewer supplies than they claimed; only recently has any kind of monument been erected to the effort of britain and other allies to help the Soviet Union.

General de Gaulle chose the French national day to try to rebrand his movement as La France Combattante (fighting France) and no longer merely La France Libre (free France). The new name was formally adopted and acknowledged by the allies but it never acquired the same currency as its predecessor which remained the usual name until the end of the war.

RAF Bomber Command  put the capacities of hte new Lancaster bomber to the test when it launched a raid on the German/Polish port city of Danzig/Gdansk. As a major centre of U boatt construction it was an attractive target.  This involved a record flight of 1,750 miles which meant that it was attacked far less than other German cities. Even though the mission was flown in daylight only 15 of the 44 aircraft despatched reached the target, which suffered little damage. Two bombers failed to return