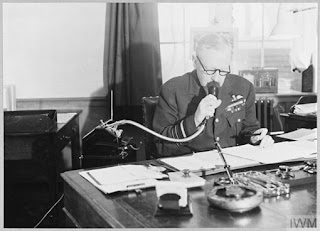 In the wake of a heavy RAF raid on Hamburg the head of Bomber Command  Bert Harris diversified into propaganda. Speaking on the BBC he promised the German people unremitting bombing but invited them to prevent this by ridding themselves of the Führer. He pointed to the industrial resources of the US  and warned that they too  would be deployed in his campaign; the first B-17s had just arrived in Britain.  In the event the Americans declined to join whole heartedly in Harris's programme of bombing cities and the Germans declined to remove Hitler. When the broadcast was questioned in Parliament, the government stood by Harris albeit without explicitly  endorsing his statements.

The Soviet forces west of the Don river were defeated in the battle of Voronezh. On the face of it this was yet another defeat for the Red Army but the fighting was hard with heavy German casualties and the German advance towards the Volga and the key city of Stalingrad was delayed for two weeks. The sheer size of the Soviet Union was Stalin's trump card.

After being banned for eight year the Indian Communist Party was once again authorised by the British authorities. The concession was purely symbolic but provided useful register of how far sentiment had swung in favour of pandering to the Soviets. Their Indian arm made a negligible contribution to the war effort.