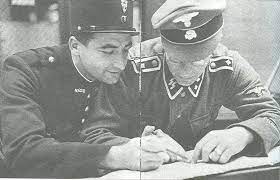 Vichy collaboration with the Germans reached a new low point with a mass round-up of some 13,000 Jews in the Paris region. They were divided roughly equally between men, women and children. The operation was launched on German orders but executed entirely by the French authorities so as to preserve the fiction of autonomy. The victims were held at the former cycling arena, the Velodrome 'd'Hiver, and the crime is known as the 'Rafle du Vel' d'Hiv'. From there they were taken to concentration camps including Pithiviers and Drancy and thence to camps deeper in the Reich. Almost none returned alive. The chief architect of the operation, civil servant Rene Bosquet, was convicted in 1949 on a minor charge but almost instantly rehabilitated for supposed help to the resistance and went on to a successful career in politics until his guilt became too obvious to ignore.

Air Chief Marshal Sir Hugh Dowding retired from the RAF at the standard retirement age of sixty. After he stepped down from Fighter Command in 1940 he had not had a happy time, bogged down in querulous disputes with the Air Ministry. He had been conspicuously unsuccessful as the nominal head of a purchasing delegation to the USA. His only worthwhile work had been to write the despatch recording his victory in the Battle of Britain. It was not published until after the war, supposedly for security reasons but more because of its acerbic tone towards some of the Air Staff's decisions. Dowding was never raised to the prestigious and lucrative five-star rank of Marshal of the Royal Air Force unlike the service's other senior wartime commanders. This was a mean-spirited punishment for his awkwardness and an unspoken rebuke for having proved that the Air Staff's pre-war doctrine that only bombers provided a defence against the Luftwaffe was wrong.

Despite the defeat of the censure motion political discontent with the government was still strong and a parliamentary motion against Defence Regulation 18B under which potential German sympathizers had been detained without trial attracted 25 votes. The case against 18B included the scale of the government's arbitrary powers, which were dislike across the political spectrum, and a more partisan objection amongst Tory right-wingers to a measure administered by a Labour Home Secretary.