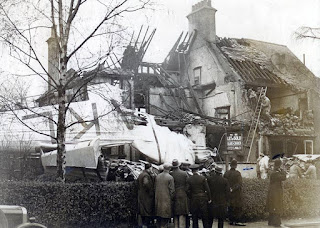 Britain suffered its worst air disaster of the inter-war period. But for the abdication crisis, which dominated the news even though there no material developments in the public domain, it would have attracted immense coverage. A DC2 aircraft of the Dutch airline KLM headed for Amsterdam crashed in fog taking off from Croydon airport. The take-off had been made by the crude but widespread method of following a straight white line painted on the grass runway. Of course, one the aircraft was airborne this no longer provided guidance. The machine hit a mercifully empty house in the suburb of Purley, which was practically destroyed.

Of the 17 people aboard, 15 died. Given the cost of air travel in that era it was practically inevitable that the victims included a number of distinguished individuals. They included a former Prime Minister of Sweden, a German Baron married to a filmstar, a director of a number of major Swedish concerns and the Spanish inventor of the auto-gyro