The Ex-King Leaves the Country into Exile and Idleness 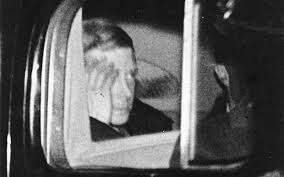 At 1.52pm the abdication bill passed its last stage in Parliament and Edward VIII ceased to be King. Henceforth he was to be known as Prince Edward, Duke of Windsor, as he and his oldest brother Albert, Duke of York, now George VI, had agreed. In practice the first part of the title was rarely used. That evening he broadcast to the nation and the world over BBC Radio from Windsor Castle to explain his decision. He wanted to deflect potential criticism from Mrs. Simpson by making it plain that the choice was his own. He did not succeed and she was widely blamed.

That night he left Portsmouth for exile aboard the Royal Navy destroyer HMS Fury. Only at the outbreak of war almost three years later did he return to Britain at all and he never did more than visit briefly the country over which he had reigned. During the war he held the comparatively minor post of Governor of the Bahamas, but otherwise he had no occupation.