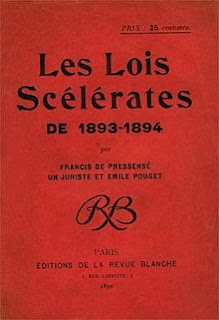 Léon Blum's Front Populaire government limped on in the face pressure from Right and Left in the Assembly. The unwise attempt to impose press controls notably the punishment of the publication "false news" laid it wide open to criticism. They were an uncomfortable echo of the Lois scélérates of forty years previously by which right wing governments had attempted to muzzle anarchists.Perhaps worse, the plan to force newspapers to publish their financial accounts provided an invitation to call for the disclosure of the funding of the Communist newspaper L'Humanité .

The government did win a healthy majority in the vote on its foreign policy, but it was empty victory. The Communists had abstained in a major breach of solidarity with the Front and, worse, had explained the abstention in virulent terms, castigating once again government neutrality in the Spanish Civil War. Blum had come close to resignation.