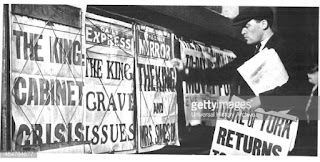 The national newspapers had picked up the story launched the day before by the leading provincial papers and there could be absolutely no doubt that the country faced a major problem. One piece of hard news that featured was that the King had announced his intention of marrying someone of whom the government disapproved. Otherwise the public had to be content with a recitation of the movements of the main players and the fact of Cabinet meetings and other conversations. And, of course, prominently displayed photographs of Mrs. Simpson.

In response to a question for Clem Attlee, the opposition leader, Baldwin made the most perfunctory statement to the House. When Winston Churchill asked for an assurance that "no irrevocable step" - code for abdication - would be undertaken, he was practically ignored. In this atmosphere rumours of an impending constitutional crisis abounded.